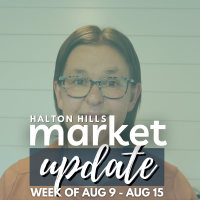 Great news! Inventory is continuing to drop. This is going to hopefully stabilize us a bit. Looking at the numbers, Georgetown this week had 10 properties sell, which has been pretty consistent week to week. Interestingly, we had 12 new properties hit the market, so not a huge number. You'd think inventory would be up, but it's not. I'll touch on that later. Acton had one sale and three new listings. Glen Williams had no sales but two new listings. Limehouse, no sales, no new listings. The rural market had three sales, which is like crazy for the rural market. All of them were under 1.3 million. It's that lower price point rural stuff that's moving. There were three new listings there. Now the real conversation this week is about active inventory. We are down to 169 active listings in all of Halton Hills. You might remember, a month ago, we were at 193, so we have seen a significant drop. I don't know if this has to do with people not getting the number they want. If they were testing the market to see if they could still get a high price. We are seeing a ton of things come off the market.

Last week, there was 24 properties that terminated off the market and more than half of them didn't reenter the market via a lower price last week. Things are definitely shifting in that capacity and this is going to help us hopefully stabilize a bit because this is naturally what happens in the summer. I've talked about this, but it didn't happen in July. We kept seeing those listings coming, but in August, we're in this mix of people coming off the market and less new listings and it's actually helping us overall. We're only at 169. Huge drop compared to where we were a month ago. Georgetown this week is down to 106 active listings from 110. We still have insanely high inventory in Georgetown. It's definitely the town that is feeling it the worst right now, but that is significantly lower. We were almost at 130 active listings in Georgetown, so major drop in Georgetown inventory as well. Looking at our price points. Under 800,000 is down from 14 to 12 active listings. 800 to 1,000,000 is also down from 26 to 25 active listings. 1,000,000 to 1.5 is down from 45 to 42 active listings. This price point was sitting super, super high. 42 active listings is a lot of listings still in that pocket, but it's just showing the overall trend right now. People are not throwing their houses on the market anymore to like see what they can get. The only people on the market right now generally need to be selling or want to sell, know what they can get in this changing market before they can buy. There's a lot of different reasons to have your house listed, but one of the reasons is not usually because they're trying to fetch a crazy dollar. Those people are officially leaving the market. 1.5 million plus is the only price point that is actually up this week. It is up from 25 to 27 active listings. This price point is like dead in the water. Nothing is selling in this price point. It is just very, very hard to move a property over 1.5 right now. We're seeing price reductions. People are having to adjust their expectations, and it's a very heavy price point that is not seeing any movement. At least the under 1.5 is still seeing movement every week. Over 1.5, not so much. Acton this week is up slightly to 21 active listings from 20. Glen Williams is up to 10 from nine. Limehouse remained the same this week at three. And the rural market is down to 29 active listings.

Another good week in terms of inventory coming down. I don't want people to be confused that I want inventory to go back to where it was 'cause that was not good either, but when we are seeing such low sales, we really need to see a cool off in the number of listings we see hitting the market every week. Otherwise, buyers are like we're gonna wait 'cause there's so much stuff coming up. They just think that as inventory continues to climb, we're gonna get better deals. Right now, we're getting close to seeing a little more predictability and a little more stability. I will say in the last week I feel like listing showings have picked up. It's still not crazy but we're seeing a little bit more than we did. Overall, I think it's still a positive update. I mean, we're still not in a good spot. Interest rate increases are looming so buyers should really be looking at buying some of these good things that are available. I definitely don't think that this is the worst market update I've had. I think it's going in the direction I thought it would go in the summer. I will be back next Tuesday to see what happens this week. Have a great week, everyone.