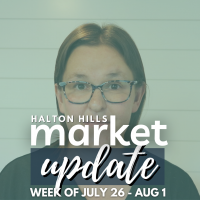 We have July's unofficial numbers but because of the long weekend, I think a few sales may still trickle in. Let's look at July and what happened last week. Taking a look at July of 2021, we sold 93 units and our average price was 1,000,079. I honestly thought we would be behind last year when I looked at this July's numbers, but we're actually up from last year, and we're up from June. In July of 2022, we sold 52 units, which is really bad. It's down 44% since last year. This is just showing the kind of market we're in, because there's tons of stuff to buy. Our average price was at 1.190. We are actually up over 10% compared to last year's average price, which really surprises me, and we're actually up 1% since June. We are still down over 17% since our peak average price in March, which was 1439, but the numbers are not as bad as I had thought they were going to be. May and June definitely felt like those months where we felt that price hit, but seeing our units, so our units are down 56% since March, there was 118 units that sold in March. We are down 56% in terms of units. What's interesting, in March, our average units in a week were 62 available units in all of Halton Hills, and we sold 118 in total for March. In July, our average was 186 active units, which is 66% more than what we had in March, but our units are down 56%. Lots of numbers to unpack there, but it's just showing we are definitely on a decline, and the biggest thing is there's just not a lot of units transacting. Buyers are not just jumping to put offers on properties. We are seeing a huge decline in the number of units despite the fact that we have tons of stuff available. Overall, that is the general theme. Really good news about pricing though. I thought we were for sure gonna be in the 1 million to 1.1 range, but we held pretty close to that 1.2, which surprised me. We didn't see that 10% decline, because from May to June, we saw a 10% decline, but we're actually up 1% since June.

For this week's numbers, they're not the worst July numbers, and definitely not as bad as I thought they would be. Georgetown had nine sales, so we are still sitting at very low sales numbers in Georgetown. The good news is there was only seven new active listings. This is what we've been waiting for. We've been waiting for inventory to stop hitting the market at such a rapid rate. If we can get a bunch of weeks where our new listings continue to be softer than our sales, that will help to put us in a spot where we can maybe go into the fall market with a little more balance. That's what I'm hoping, 'cause right now, it's definitely tipped in the favor of the buyers, but the biggest thing is just buyers are not buying properties right now. The other markets, there's not a lot really happening. Acton had one sale and one new listing. Glen Williams: no sales, no new listings. Limehouse had no sales but one new listing, and the rural market had one sale and two new listings. Only 11 sales in all of Halton Hills, but the good news is not a huge amount of new listings hitting the market. Hopefully we still have a chance in August to do some stabilizing going into the fall.

In Acton, we are down to 20 active listings. Still a high number there, but it's down from 22. Glen Williams remains the same at 11. Limehouse is up slightly to four active listings. That's a ton of listings in Limehouse. I know it sounds low, but four in Limehouse is a lot of listings. It's like 11 in the Glen; it's just numbers we don't usually see. And then, the rural market finally came back under that 30 mark. It went from 31 to 28 active listings in the rural market. Overall, this is good news. I mean, our prices didn't plummet from June to July, so that's good. Our inventory the last week has softened, actually quite a bit. Like, that's a pretty significant drop compared to what we've been seeing. Currently, the properties that are on the market, on average, have been there for 34 days. And that's not me diving in and looking at the ones that have terminated and re-listed. I would guess that it would sit somewhere between 40 and 50 days on average if we did that. But the ones that are sitting there based on their contract date that's in the system, 34 active days. Things are taking months to sell now, and it's just a really major shift from where we were. But I feel kind of positive about today's update. I feel positive about July numbers. I feel positive about that we might actually be seeing listings slow down. There's a lot to unpack, and I know I threw a lot of numbers there, but the next two weeks will really be a good indicator. If we are seeing buyers reentering the market and new listings slowing down, maybe that will give us a bit of a change in these numbers. I will be watching it closely, as always. I will be back next Tuesday to see what happens this week. Have a great week, everyone.