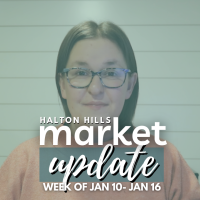 Hi, everyone! Welcome to this week's Halton Hills housing update. So, there are no major waves happening in the market right now, but small trends that I think we are going to continue to see.

So, looking at last week’s numbers, Georgetown had seven sales. That is right in line with buyer numbers picking back up. Around Christmas we were down to around four sales every week, which was pretty slow, but the buyers appear to be back in the market. Things have been somewhat busy, and there’s lots of stuff moving into the “sold conditional” status. So, I think buyers are back out. So yes, we had seven sales in Georgetown and we also had ten new listings. I think the trend we are going to continue to see is buyers active in the market with more and more listings. I think listings will continue to outpace sales, which will make inventory rise. I also think at this point, it’s not a dramatic influx of new listings and I don’t know if it will ever feel dramatic. I think it might just be increasing by a few more each week and then eventually a month or two from now inventory is super high. So we shall see!

Looking at Acton this week, we had three sales, which is great for Acton. There was a long time where they had none. There were also two new listings, so Acton was pretty balanced. Glen Williams had one sale and two new listings. Nothing happened in Limehouse, and nothing has been happening lately. And finally in the rural market, we had no sales and two new listings.

Now looking at active inventory! In Halton Hills last week we had 110 active listings. This week we are up to 112. So this is what I’m talking about. Incremental increases week to week that eventually stack up. When our inventory started to skyrocket last year, it was rising between 10 and 15 listings per week because people were still trying to catch the market. This caused us to see a flood of listings and then buyers just backed off. So right now we’re seeing new listings but we’re also seeing active buyers which is making things a little more balanced.

So in Georgetown this week, we have 69 listings which is up from 67 last week. It isn’t a huge increase and not super high when compared to the 130 we were seeing in the inventory peak of 2022. Looking at our active price points, under $800,000 is up slightly from seven to eight active listings. They’re actually all under $700,000 and are condos or condo townhomes. From $800,000 to 1 million, we are down slightly from 18 to 16 active listings and this price point is definitely the one seeing the most movement right now. When you’re under a million dollars, you don’t have to put the full 20% down and you can still get an insured mortgage. So this price point is good because as financing rates are going up and the approval amount is going down, you can be more creative with your down payment if you buy for under a million dollars. One to 1.5 million is up from 21 to 24 active listings, and this was the price point that was hurting the most last year. We felt a bit of a break for the last month but it’s starting to pick back up again. Something to note here though, out of the 24 active listings, 8 of them are under 1.2 million, so the majority of these houses are in the higher bracket. Additionally, of the eight that are under 1.2, three of them have sold conditionally, so under 1.2 million is a pocket that is also still moving. Over 1.2 million though is where houses seem to really be sitting. 1.5 million plus remained the same this week at 21 active listings and nothing is selling in this price point. Nothing came off the market, nothing listed and it just stayed the same at 21.

In Acton this week, they are down from 19 active listings to 17. Acton was sitting pretty high for a while so 17 is a much cushier spot if you are going to be listing your home in Acton. Glen Williams remained the same at six active listings. Limehouse is down from two to one active listing, so there’s not much available here. The rural market went from 16 to 18 active listings this week so there’s lots available! Like I always say though, when there is stuff available in town, we do see the rural market slow down and part of that is also because it’s normally higher ticket products in the rural area, and as we know, higher priced properties aren’t selling as quickly.

Overall, the market is doing pretty much what I expected it to do in January. I think we're going to see a slow climb and by the end of the month I think our inventory will be up. I don’t know how significantly up it will be, but I’m going to guess a lot since January 1st. We started this year with an even 100 active listings and now we are up to 112. We’re already seeing the steady climb so it will be interesting to see what happens. There is also another interest rate announcement at the end of the month, so I don’t know if we’re going to see a surge of buyers trying to buy before that but I do think we will continue to see inventory climb. It’s going to be the trend, but time will tell! Anyway, I will be back next Tuesday. Have a great week!