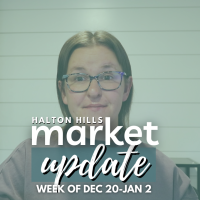 Hi everyone, welcome to this week's Hilton Hills housing update. So, happy new year! I hope you all had a wonderful holiday! I took last week off, so we have lots to cover today. We’ll start by looking year over year at December's numbers - In December of 2021, our average price was really starting to pick up and inventory was very low. So, in December of 2021, our average price was 1.27 million, which is very high. We only sold 42 units in that month, which also showed that there was not a ton to buy, which was causing prices to serge at that point. Now when we look at December 2022, our average price was $1,000,060 which is down 16.5% year over year. Additionally, since our peak in March of 2022, which was over 1.4 million, we are down over 26%. So, prices have certainly softened and I think in 2023 that trend is going to be continuing. So that's sort of where we sit with our December numbers. We also only sold 35 units in December, which is a very low number of sales but not super surprising with the trends we have been seeing.

So, looking at the sales that happened over the last two weeks in Georgetown, there were nine sales, which is super low considering the average per week is between eight and 11. So, to only have nine sales over a two week period is low, but not totally surprising given the time of year. Over the last two weeks, there were only four new listings. This means that inventory will be down for sure. In Acton, there were 5 sales over the last two weeks, which is consistent with what we have been seeing, and two new listings. Glen Williams had one sale and no new listings, and Limehouse and the Rural market saw no sales and no new listings. Something to note here though is that over the course of two weeks, we had 20 properties terminate and 17 have yet to re-enter the market. Seventeen properties completely coming off the market is a lot, so I do believe that we will see some of them relist over the next few weeks and I believe that inventory will climb quickly this month.

Looking at active inventory now, in all of Halton Hills, there are 100 active listings. We have not been this low since the first week of April, where we were at 87 active listings, and then it started to climb again. So, our current inventory is comparable to April of 2021. A few other numbers to note here though, our peek in 2022 was 193 active listings, so we are pretty far from where we were when we felt that market saturation. 100 listings versus 193 is a huge difference in terms of supply. The first update I did in 2021, we only had 29 active listings, meaning this time last year there were only 29 properties available in all of Halton Hills- which is insane! So when comparing this January to last, no inventory isn’t that low, but its definitely down from the peak we saw.

Acton is down from 26 to 21 active listings, which is still pretty high for Acton. Going into last year Acton had around six active listings and at some points they only had one or two. 21 is not great news for the sellers in Acton and I also find that price points in Acton aren’t adjusting as quickly as they should be, given you can get comparable products in Georgetown for what they are asking. It will be interesting to see what happens with Acton this year. Glen Williams is down from eight to seven active listings. Lime house is down from four to two, and the rural market is down from 19 to 14. Quite a few of the terminations I talked about were in the rural market, and it always struggles when there is inventory in other places. That being said, 14 is pretty low compared to the 25-30 we were seeing there over the past few months.

So, that’s pretty much a snapshot of where we ended 2022. No surprise, our prices came down from the start of the year, but I am surprised with how low our inventory has gone. I do think it will help stabilize the market a little bit though for the first four to six weeks of 2022. As I mentioned above, I do think a lot of those terminated properties will relist this month, so I suspect we will see an influx of new listings (more than a normal January) coming up.

So, we'll be watching the numbers closely, but 2022 has definitely been the craziest year in my career in real estate. Just such a roller coaster! Unfortunately, I think for 2023 we're going to be on a downward decline through most of the year. Hopefully at some point it stops. So, that's where we landed for 2022 and it'll be interesting to see what happens in 2023! I will be back next week to see what happens during our first week of January. Have a great week!