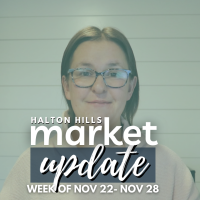 Hi everyone! Welcome to this week's Halton Hills housing update! So, our numbers are staying pretty consistent week to week. We did see inventory climb a bit this week, which is a bit of a shift from previous weeks. Let’s look at the numbers!

In Georgetown this week, we had nine sales. The market is still moving and nine sales falls between the seven to 11 sales we’ve been seeing per week over the last few months. Nine sales shows us that buyers are still active and properly priced products are still moving. The shift we saw this week was 15 new listing, which isn’t super high, but also isn’t super low. We also didn’t see as many properties come completely off the market as we have in previous weeks. So, inventory is up this week but half of the new listings were over $1,299,000. The higher ticket items are still coming on the market but are also the products that aren’t moving very quickly.

Something to note this week, there was a detached house on Prince Charles which is in the Delrex area, that sold for under 700,000. It has been years since we have seen that happen. This is again reinforcing that our prices are still coming down. Nothing sold over 1.3 million this week, with 1.27 million being the highest sale in Halton Hills. This supports that our higher ticket stuff is not moving, and houses in the higher pockets need to come down to a more realistic price pocket. When looking at properties that went off the market this week, there were only three that came off and didn’t relist. This is down from the last few weeks where we were seeing tons of houses leaving the market.

Looking at active inventory, we are up slightly in all of Halton Hills. We were at 145 active listings last week, and are now up to 148. This is not a ton of movement, but certain markets and certain pockets definitely felt a bit of a shift. In Georgetown this week, we have 87 active listings, which is up from 83 last week, again, not a massive jump. This is still pretty low compared to the 130-140 active listings we were seeing in the summer, but things are still being bought up and we will continue to see things slowing down in the coming weeks. If we continue to see low listings and sales between 7 and 11 per week, we should go into the new year with softened inventory.

Now looking at our price points, under $800,000 is slightly up from 10 to 12 listings which are all condo apartments or condo townhouses. There are no freehold properties currently in this pocket. $800,000 to a million was down slightly from 18 to 17 active listings. One million to 1.5 million is also down from 33 to 32, and 1.5 million plus is up from 22 to 26 active listings. A lot of the properties we see come off the market are over a million dollars. There aren’t many buyers willing to spend over 1.5 million right now.

In Acton this week, we are down slightly to 23 active listings. Glen Williams remained the same at seven, Limehouse remained the same at four and the rural market remained the same at 27. As you can see there isn’t much movement in our secondary markets. Acton continues to see sales, although not a super high number of them, it’s staying pretty consistent there. Georgetown is seeing more fluctuation but I do think we are going to see a decreasing trend in terms of new listings and available listings. I also think our price points are going down right now and I do think that over the next six months, we will see a drop in prices. I mean just based on that Prince Charles house I mentioned earlier, a house off of Delrex, regardless of condition getting under $700,000 is an indicator of where things are at and where buyers are willing to put their money.