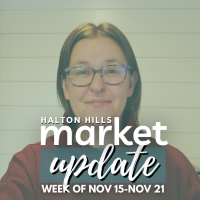 Hi everyone! Welcome to this week's Halton Hills housing update. So, we had an interesting week and I think things are really beginning to slow down in terms of new listings. So, let’s look at the numbers! In Georgetown this week, we had nine properties sell, which is a pretty good number, I would say, given what's going on in the market. Something to note is that we only had seven new listings. So, that is way down from what we've been seeing in our previous weeks. What normally happens (and I talked about this last week) is around mid-November, we start to see a slowdown of new listings and this week’s numbers support that. So, looking at Acton, we had two sales and one new listing. Glen Williams is the talk of the week here because they had three sales! That is a massive week for Glen Williams. I don't know the last time we saw three sales here. There were also two new listings in Glen Williams. Limehouse had no sales and no new listings. The rural market had no sales, but three new listings.

Looking at active inventory now, all of Halton Hills is down from 151 to 145 active listings this week. That’s another indicator that our inventory is continuing to come down, as we’ve been pretty stable between 148 and 160 for months now. Dropping down to 145, I think this number is just going to continue to drop through the rest of November and December, and it'll be interesting to see where inventory goes in January.

So, in Georgetown this week, we are down from 90 to 83 active listings. The last time inventory was this low was at the end of April. So, this is very low in comparison to what we've been dealing with for the last six months. Last year, our inventory was dropping through the end of the year, and we went into January with 30-something active listings in all of Halton Hills, with only 11 active listings in Georgetown. It was insane going into last year, but to be back at inventory levels that we haven't seen since April is interesting. It makes me think about how that might impact the market despite the fact that buying power is down and it seems like buyers are less active. Having low inventory, it’s supply and demand. The numbers are getting low because of the lack of demand. It's, again, just interesting for someone who enjoys these numbers.

This week is interesting for a lot of reasons. I think mostly because we saw such a low number of new listings, which is a standard that happens during the last six weeks of the year. But, we are still in a really unknown territory when it comes to where the market is going overall. I think we all still agree that prices will likely continue to soften, but if we continue having fairly low inventory levels and buyers are still active, it's really going to keep our market moving. My experience with buyers right now is that they are coming to terms with where interest rates are. They're obviously re-evaluating things but they're still active in the market and people still need to and want to move. So, if the numbers make sense for them, purchases are still happening. So, as we see these inventory levels coming down, and I mean we're talking the lowest inventory in Georgetown that we've seen in six months, that is really going to impact our supply and demand levels. We know over that million plus still has a ton of supply but underneath a million dollars we only have 28 properties in Georgetown. It's really not that high.

So overall, I'm not sure where this is going to go. Typically, we go into January with low inventory and it's busy right from the get go. That's been the trend in the last, I don't know, six, seven years. So, the real question this year is are buyers going to be as busy? When inventory levels naturally drop throughout the remainder of the year, are we going to see that demand spike and prices go up? I don't think so, but not see prices drop would be a win. Anyway, that was a bit of rambling, but I just have a lot of thoughts about what this means and where the market could go. But, this is why we look at these numbers every week, to really watch the trends and really see where things are going. So, I'll be back next Tuesday. Have a great week!