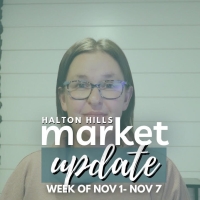 Hi everyone! Welcome to this week's Halton Hills Housing Update. So, the first week in November was pretty anti-climactic. We certainly are not seeing any major swings, whether it's sales or new listings. Let’s get into it!

Looking at last week's numbers, in Georgetown, we only had eight sales. It's not the highest or lowest number, but things are still moving in town, especially under that million-price point. Something to note is that we had 15 new listings, but 8 of them were over 1.5 million. That is a price point that is struggling to move, and we really don’t need any new listings in that pocket. So, to see eight new listings is not great, but what is really skewing the numbers is the number of properties coming off the market and not re-listing. Those properties are keeping inventory levels pretty stable. So, despite having eight new listings in the 1.5 million pocket, we had quite a few properties also in that pocket come off the market completely. Our inventory isn’t going out of control because a lot of people are leaving the market.

In Acton this week, we had two sales and three new listings. That is good news for Acton because we have seen multiple weeks where things are actually selling in Acton. We had a long stretch where nothing was moving. So, we're seeing not a ton of sales in Acton, but we are seeing some, so that is good news. Looking at Glen Williams, we had no sales and no new listings. Nothing has sold in the Glen since the end of September. So, similar story for Limehouse - we had no sales, no new listings, but the last time something sold there was the end of August. When we look at the rural market, we had no sales there either. We did have one new listing, but there’s something to note in the rural market. Since the middle of September, so, basically two months, we have only seen two properties sell. We have seen very low sales and this is probably because those three markets have a higher average price point, with most of the stuff being priced well over $1,500,000 and over $2,000,000. So, that pocket being dead doesn't surprise us, but it has been a while since they have had a sale.

So, looking at our active listings this week. We had 150 listings available last week in all of Halton Hills and we are up to 154 listings this week. This goes back to what I'm talking about. Despite the fact that we had more new listings than sales in most areas, our inventory did not climb the same number because we had a bunch of properties come off the market. So, it's really keeping things stable. Georgetown this week went from 89 active listings to 92, which is still a pretty calm number compared to the 130 plus that we were seeing throughout the dip in June and July where things were plummeting in price. When we look at what’s available in our price points, under $800,000 is down slightly from 14 to 13 listings, but most are condos and condo town homes. Those products aren’t moving at the rate they previously were. $800,000 to $1,000,000 is up from 15 to 17 active listings, but if you have a good product under a million, and its priced well and shows well it will move. So, that's kind of a safe pocket if you are being realistic. One to 1.5 million is up from 35 to 36 active listings. We’re not seeing a ton of sales in this pocket right now, but it’s not spiking the way I thought it would. 1.5 million plus is up from 26 to 29. As I mentioned, there were 8 new listings in this pocket and we only went up by three, which reinforces that a lot of properties are coming off the market, keeping our numbers pretty steady.

As we come into November and December, I think the market will continue to slow. I think what is helping the market move is that there are people still holding on to pre-approvals from August right now. People were pre-approved before the September and October interest rate hikes, and so they are trying to get into the market. So, I think that’s still keeping things moving but it’s important to remember that people always need to move for whatever reason. Whether it's a relocation, you need a bigger house, a smaller house, separations, there's tons of reasons why houses continue to come on the market. So, we'll always see the real estate market moving but it may slow at some point. We will see what happens in November, but to start off November like this, it’s a pretty slow start and it puts us on pace with having under 50 units sold in the whole month. So, that will be something interesting to watch and of course, our average price from last month was pretty awful, so we are hoping that this month we can see higher ticket products sell.

So, first week of November saw nothing crazy, but the whole month is going to be an interesting watch just to see where we go into December, which is always our quietest month. If we see less listings coming up through November and December, will we see our normal trend where we go into January and February with lower inventory levels and usually a busier market? I’m not sure but it will be an interesting month to see what it will be like going into the new year. Anyways, I will be back next Tuesday to see what happens this week. Have a great week!