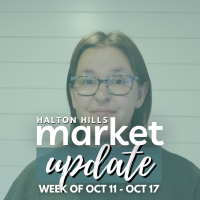 Welcome to this week's Halton Hills housing update! The numbers are definitely not dramatically changing right now. We had some weeks earlier this year where inventory was pretty up and down, but things seem to be pretty stable right now. We're not seeing a ton of new listings hitting the market. So, the numbers have been kind of interesting.

So, looking at last week's sales, in Georgetown, we had 12 properties sell, which is a normal number, not high, not low, but we only had 13 new listings, and we had a couple of properties come off the market completely in Georgetown. That means inventory is going to be down, and  we're just not seeing the kind of influx we need to see in inventory right now. We have a lot available, but the stuff that is there has been sitting because it's generally overpriced. Anything new that's coming up and is priced right is transacting. So, we just need some more good listings to hit the market at the right price, reflective of today's market.

So, in total, we had 13 sales in Halton Hills this week, 12 in Georgetown and one in Acton. All of them were under 1.25 million, and nine of the 13 were under 1 million. So, we are seeing a lot of properties under that million mark transact, because under the million mark is where you can still get away with a lower down payment. Over a million, you have to put 20% down, and that's just causing the over a million market to be slower. Under a million is still moving well, especially if you price it well. We have so much inventory over 1.25 million, but the top end of the market is like, dead. Nothing is moving in the upper portion of the market, which is not great news for sellers that are in those pockets.

So, Glen Williams had no sales, but it did have two new listings. Limehouse had no sales and one new listing. And the rural market, no sales and three new listings. When we're looking at active inventory, we were going down for quite a few weeks. The good news this week is that we are up. We had 152 active listings last week in all of Halton Hills, and this week we are up to 159 active listings. This is still a lot lower than where we were in the summer, but it’s going in a direction that will hopefully keep this market moving. However, we are not really getting the inventory in the right places. What I mean by this is that Georgetown's inventory is the only market this week that's actually down, and this is where we need more listings. Last week, Georgetown had 93 active listings, and this week we have 92. This is the market that moves the most, so inventory being down is not great. At one point this year we were at about 140 active listings in Georgetown, which means we had more to choose from. I mean it's good, it's healthy right now. We have listings, but we're not skyrocketing in terms of inventory. Our prices aren't plummeting right now either, but it does feel like we could use a little bit more quality inventory that comes out at a correct market price - if that makes sense.

Overall, the Halton Hills market is pretty balanced right now. We're not seeing a huge number of buyers transacting, but we're not seeing a huge number of listings entering the market either. There are so many listings that have been here for so long because they are overpriced. Our average days on market right now is 40 days on market, and that's not taking into account when properties have terminated and re-listed. Forty days on market is not great, and we have to get a better variety of inventory that's hitting the market, at market appropriate prices. People are not willing to pay what they don't deem market value right now. It's pretty clear also that there are a lot of properties that are moving, if they're priced correctly. I have a lot of buyers who have looked at the inventory that's there, and they say, "Well, it's too high“ or, if they don't want it, then it's just sitting there, and people aren't adjusting accordingly. I talked about this last week, and I thought we'd be in a completely different market by now. I thought inventory would be way up, and I didn't think the buyers would be active. But, we're sort of seeing this like meeting of the two, and we're in a balance, but I do think there are enough buyers right now that sales would pick up if things were great and priced right. So, with interest rates going up again, we are going to have another change in the market, but the last interest rate seemed to do nothing. I feel like everyone's just kind of like, "Okay, this is what it is now, and if we need to move, we're still going to move." It will be interesting to see if that has an impact on the market, and if we start to see buyers retract. But for now, I think people are still living on their pre-approvals from before the September rate increase, and so the market's still moving. I don't know if I'm going to be able to say that at the start of next year, but for now, I think we're going to finish the year not in as doom and gloom as we thought we were going to. I don't know, we'll see! Anyway, I will be back next Tuesday, have a great week!