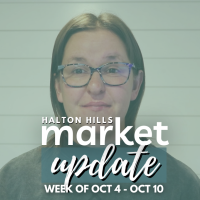 Hi everyone! Welcome to this week's Halton Hills housing update. I hope you all had a lovely Thanksgiving weekend. Let's look at what happened last week in Halton Hills.

So, Georgetown last week only had seven sales, pretty low number overall for Georgetown. We might have missed a few sales reported because of the long weekend. So next week we might see a higher number than sort of is accurate because it will reflect the sales that happened that didn't get reported yesterday but even still last week was eight sales, this week seven sales we're not seeing very high sales weeks is the trend. We only had eight new listings, so the new listings have really slowed down. I thought at this point we would be getting a lot of new listings and that is just not the case. We are not seeing a ton of inventory hitting the market and we are seeing stuff continuing to come off the market. So that's just sort of changing where we thought the fall market would go this year. In terms of our sales last week almost everything except for two products between all the markets was under a million dollars. So, under a million dollars, that price point is still moving but over a million is sitting pretty quiet.

In Acton last week we had two properties sell but four new listings in Acton, but Acton was one of the markets that had quite a bit come off the market. There's, I want to say like fatigue in Acton. Those listings that are there have been there for a long time and things are just not moving. So, I'm not surprised to see some properties coming off the market there. Glen Williams had no sales and one new listing. Limehouse, no sales, no new listings. rural market, no sales but two new listings.

Looking at active inventory, we continue to decline which is not where I thought the market would be at this point in the fall market. Last week all of Halton Hills had 153 active listings and this week we are down to 152. So not a dramatic drop, but it's certainly a drop and it's not going in the direction that we anticipated. Georgetown is down from 95 to 93 active listings this week, and again, that like was in the 130 to 140 range in July. So, we are down pretty significantly and our market is still moving but not at a rapid pace. When we are not seeing an influx of new listings combined with people taking their properties off the market and inventory going down we're going to continue to see some busy weeks here.

Overall things are obviously higher in Georgetown, but they are nowhere near where we were a few months ago. And the buyers are still out, they are simply not very aggressive right now. Just getting buyers to transact in this market is certainly a challenge right now. Acton this week went from 26 down to 23 active listings. Like I said, quite a few came off there. I think some people are just like, okay, nothing's selling in Acton, we're just going to take our property off. Glen Williams remained the same at six. Limehouse remained the same at four and the rural market is up slightly to 26 active listings from 24, so not a crazy week. Again, we might see some sales get carried over to next week's numbers because we missed the offices being open on Monday to report anything that happened over the weekend. But I mean, we're probably talking like one to four listings, we're not talking like dozens. So, I don't think the numbers this week are crazy off of the realistic numbers, but next week when we see a spike it will probably be correlated to that.

So as a seller right now, you're actually in an okay spot especially if you're under a million. There is not a lot available, and that price point seems to be moving. The over a million price point is definitely transacting a lot less. There's a lot less buyers willing to move in that pocket.

Next week I think we'll see a higher sales week, but I'm really interested to see if we see a lot of new listings. Were people maybe getting their houses ready to list over the long weekend? I don't know, but by now, I really thought our inventory would be climbing and it's not. Anyways, I will be back next Tuesday. Have a great week, everyone!