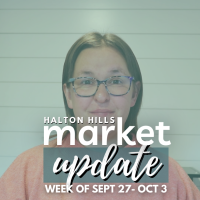 Hi everyone! Welcome to this week's Halton Hills Housing Update. So, I have a juicy week for you this week. Lots of interesting things to talk about. We are going to start with September numbers. So, in September of 2021 we sold 81 units and this September we sold 61 units. So, we're technically down 24% year over year. But what's notable is that this is our highest units sold in a month since June. We definitely felt a bit of a pickup coming out of the summer. So, that's I guess some silver lining good news for the units sold.

The thing to talk about that everyone is always interested in is the average price. So, in September of 2021, our average price was $1.172 million. And in September of 2022, our average price is $1.153 million. We are only down 1.6% year over year and we are almost exactly where we were last month in terms of average price, we're up $2,000. So, overall our price plummet seems to have stabilized a bit here. We, I think, still have room to go down unfortunately, but the people that were seeing a 10% drop month over month, that's not happening to your properties anymore. It's slowly softening but not dramatic. And just a note, 'cause people are always interested where we came from, from March, we are down 20%, almost exactly 20% from our peak average price in Halton Hills, which came in March at $1.439. So that's where we stand. This is obviously nowhere near where we were at the start of the year but we are not in this crazy decline to only lose about a percent month over month given the market we're in, that feels like a win.

So, this week's numbers are really interesting, mostly surrounding active inventory. Looking at sales, Georgetown last week had eight sales, which is a normal number for Georgetown. We've had some higher weeks, lower weeks, but 8 to 10 is our stable, pretty consistent number. We only had 11 new listings, so we didn't see an influx of inventory that we thought we were going to be seeing based on the last few weeks. Okay, so I'm going to get geeky here for a second because this is really interesting, and it really is impacting our inventory. So last week, how I do it, when I'm looking at the new listings, I take away properties that have terminated, suspended, expired, and re-listed, because they're not actually new listings. So, I actually dive right in, I pull them all out to make sure I'm only capturing properties that are new to the market. So last week we had 33 properties go in that status, which is a very high number. And then, what's more interesting is of that 33, 18 of them did not re-list, they came completely off the market. So, in Georgetown this week we had 8 sales, 11 new listings, our inventory should be up. But you are going to see, we had a huge drop in inventory this week because properties just came off the market. So, 33 went to that terminated, suspended, expired. 15 of them re-listed at a new price on the market, so I took those out. But 18 of them, completely off the market, did not re-list. That's not to say they might not come back in the next week or so, but really had an impact on our numbers this week. Analytical brain loves that. Anyways, so I'll touch on that in a little bit.

Now looking at Acton sales, Acton had two sales and three new listings. Glen Williams and Limehouse, no sales, no new listings. The rural market had one sale and no new listings. So now looking at active inventory. This is really the interesting piece this week. Last week we were at 166 active listings and this week we are down to 153. So, all of those properties that came off the market had a huge impact on our overall inventory. Georgetown was at 103 last week and we're down to 95 active listings. This is a week where our listings outpaced our sales but because of those people pulling their properties off the market, we saw a massive drop in Georgetown, down to 95 active listings.

Looking at our price points, under $800,000 went from 15 to 13 active listings. There is a ton of condos and condo town homes available right now. So, if you're in that market, tons of options. 800 to a million took a big drop, a lot came off the market here. 26 active listings were down to 21 active listings this week. That's a pretty low number compared to what we've been seeing in that pocket. And last week we actually saw two detached Delrex area houses sell under $800,000. So huge pullback in pricing on certain products in that pocket. $1 million to $1.5 million went from 35 down to 33. So not a huge drop, but we definitely saw a decrease, which is nice. And $1.5 million plus is the only price point up this week, it went from 27 to 28 active listings. So, overall, our pockets were down, but there is still, inventory sitting high in every pocket, because our inventory is still sitting high. It's just a weird shift from last week.

Now looking at other markets, Acton remains the same at 24 because poor Acton cannot get a break on their inventory levels. Glen Williams is down to six active listings. Limehouse remains the same at four and the rural market is down from 28 to 24 active listings. That saw a big drop too, a couple of those properties that came off were in that market. So, my overall assessment, September, we did fairly good compared to August. We didn't see a dramatic drop. We have been talking about how we are on par with where the market was last year and these numbers reflect that, our average price is almost the exact same as last September. So, we're not in that rapid decline anymore which is good news for sellers. With these interest rates, I'm really surprised that we're not seeing more of a dramatic decrease, but things are still transacting and with our units being up versus the last two months, that's a sign in the right direction. And fall is busier, so it's exciting to see this market moving again at a sort of healthy pace.

Finally, looking at our inventory levels, that was a huge surprise. It's good news for sellers. It means that the non-serious sellers are coming off the market and if you are listing your home, you might have a chance to have some busyness to it because there's not a lot of new stuff hitting the market. So, I just think it's an interesting week this week. And so, October numbers I anticipate are going to be busier than September. It feels right now, like things are moving and we've even seen some multiple offers coming back. I need to laugh, some of these markets, there's people holding off offers. So, I don't know what's going to happen in October but I'm happy with September numbers and I think this drop in inventory will be good for sellers, but buyers need to realize that they maybe can't wait around for too long. Things are actually still moving and inventory is not skyrocketing and prices are not dramatically dropping. So anyways, I will be back next Tuesday to see what happens for the first week in October. Have a great week!