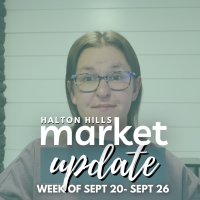 Hi, everyone! Welcome to this week's Halton Hills Housing Update. The numbers are really interesting this week and not in the direction that I thought they were going to go. Looking at last week's sales, Georgetown had 16 sales. That is a very big week for Georgetown and that's up from five last week.  Apparently, the buyers are out and ready to buy right now. Another interesting note is that we had 15 new listings. Last week we had 22 and this week we only had 15. So last week I thought, "Okay, inventory's really going to climb here," but it was a balanced week, so next week will be interesting because we should whether the trend is a high amount of new listings followed by a week of high sales, since there is more to buy. Nonetheless, it will be interesting to see how it works out.

In Acton, again, I've said this the last few weeks, poor Acton, it's just like dead there. They had two sales, which is better than no sales, which happened for a few weeks in a row, and they had two new listings, so balanced in Acton this week, but there's so much stuff available in Acton right now, so many houses for that market. I mean, like I said, there was a time at the start of the year where there was around two houses available in Acton, so Acton right now is just struggling.

Glen Williams had one sale, no new listing. Limehouse this week had no sales and one new listing. The Rural market had no sales but it had five new listings, so a really big week in the Rural market for new stuff, which isn't great news for the sellers in the Rural market because inventory is now sitting pretty high there. So, active inventory, all of Halton Hills last week was at 166 active listings. This week we are at 166 active listings. So, we saw a few weeks of it climbing and last week was completely balanced. So I think that’s good!  I'm really surprised right now that the inventory isn't climbing more, but it might, you know, all those people that bought this week, they may have stuff to sell. It's going to be interesting, like this is a really critical time in our fall market to see where the trends are going to go leading up to Thanksgiving. So, if inventory can remain sort of stable and we continue to have sales, our market's going to continue to move.

Looking at Georgetown, last week we were at 107 listings, we're down to 103 active listings in Georgetown. We saw quite a few properties come off the market in Georgetown this week, especially the higher ticket stuff. When we look at our price points, under $800,000 remained the same at 15 active listings, $800,000 to a million remain the same at 26, $1 to $1.5 million remained the same at 35, $1.5 million plus went from 31 down to 27 active listings. In this pocket, there's a lot of people trying to fetch some big numbers that just aren't warranted or going to happen anymore, and so I think a lot of those people are starting to come off the market and sort of see where this goes.

In Acton this week, inventory remained the same at 24 active listings. Glen Williams is down to seven active listings. Limehouse is up to four, and the Rural market is up from 24 to 28 active listings, so a jump there. I, again, am very surprised at where this week's numbers went. I thought that we would continue to see a climb but that wasn't necessarily the case, especially the jumps we had seen the weeks prior. So, we're just going to keep watching this for the sellers out there, they are starting, it appears, to adjust their list prices according to what's happening in the market. A lot of people that are listing their homes are being realistic and they're not trying to get that crazy premium, they're actually looking where the market is and they're listing accordingly, and those properties still seem to be moving. So that needs to be the strategy for sellers. You need to be pricing your homes appropriate to where the market is right now. And for buyers, I mean, it's active and it's busy. There are sales happening, so you still need to be sort of on the ball. However, I do still think long term trend throughout the year will be inventory climbing and prices softening a bit more. I'll be back next Tuesday to see what happens this week. Have a great week!