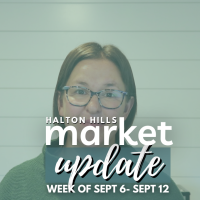 Hi, everyone! Welcome to this week's Halton Hills housing update. So, we had a very big week last week. The numbers are super surprising, and I am really excited to see where this trend goes in the coming weeks. Looking at sales last week, we had 16 sales in Georgetown. That is our highest number since the start of July, since we have been sitting pretty consistently at 9 to 10 sales per week over the last two and a half months. I believe we had one spike, to 13 or 14, and that was about it during this time frame. Sixteen sales is a pretty big number, but on the flip side, there were 19 new listings this week. So, there is lots of stuff hitting the market again. I think in August we saw people coming off the market with the intention of re-listing in September, and we’ve had a spike in sales, so maybe that was a good decision for some sellers. With that being said, last time we saw an influx of listings, the buyers seemed to put the breaks on, because they wanted to sort of see what would happen. This maybe included a better product coming up, or lower prices due to increased inventory. So, this is really the first week where I would consider some big numbers in the Georgetown line and it is going to be interesting to see how this fall market transitions during the rest of September. But overall, we have a pretty strong start to September, with both inventory coming up, and seeing active buyers.

So now in Acton, poor Acton, honestly, I can't believe how the market has just died there. There were zero sales last week. It's crazy how the sales have completely dropped off. We had three new listings, which means inventory is continuing to climb. I talked about this last week but when Georgetown's inventory is sitting higher, and there is more stuff to choose from, Acton feels the pinch. Over the last six to eight weeks, the numbers have shown that people are current opting for Georgetown over Acton, so I think prices are going to come down pretty hard here. There are still some subdivision homes that are hoping to get over a million dollars, and I just don’t think that the buyers are willing to spend that when they can get a similar product in Georgetown for the same price. So, it will be interesting to watch what happens in Acton. Glen Williams had one sale and no new listings, nothing happened in Limehouse, and the Rural market had three sales, which is a lot for Rural. They also only had one new listing which means it was a pretty strong sales week. We had 20 sales in all of Halton Hills, which is pretty good, and definitely something we haven't really seen since around May/June.

So, now looking at active inventory, we are down again this week. Last week we were at 154 active listings in all of Halton Hills, and we are down to 148 active listings this week. When buyers are really active, this is what happens, they buy stuff and inventory numbers come down. So, if buyers start to cool off again, we will see another climb in inventory. Like I said though, at the start of summer we were in the 190 range of active inventory, so this is still a huge decrease! This is really fascinating to me, because I can't wait to see how this all pans out. I thought it would be quiet with the interest rate hike, but that wasn't the case, so we shall see!

In Georgetown this week, we are down from 94 to 93 active listings, which is our lowest number in months. Our price points are varying, with some of them going up and others going down. Under $800,000 remained the same this week at 12 active listings. There are a couple of freehold properties in there, but these are mostly town homes and condo apartments. Eight hundred thousand to a million is up slightly from 22 to 23 active listings, so not a big jump, but there's a lot available in that price range, some of which is really good! Inventory between $900,000 and a million is actually really attractive, but I think a lot of the people are waiting for it to drop under $900,000, which I think will happen. This price range isn’t moving as quickly, but anything under is if it’s a decent product. One million to $1.5 million saw the biggest drop this week from 33 to 27 active listings. A couple of these properties dropped their price under the million mark to $999,000, which shifted that price point up, and brought the one million to one-five price point down. However, this price point had over 50 active listings two months ago, so sellers in this range are definitely happy because there is a lot less to compete with. The notable price point, 1.5 million plus, is somehow up from 27 to 31 active listings last week. People are not accepting what is happening in this market, especially in that price point. At no point should any subdivision home in Georgetown have gotten over $2 million. It is wild that a basic house was getting that much. Now however, these people just can't grasp what 30% off their $2 million is. We have a lot of people over 1.5 million that, I'm going to be frank, have overpriced listings. No buyer is going to spend that much on this product anymore, especially when you can get better products for less that 1.5 million from sellers who are realistic with their pricing.

So, I think we are going to see those houses continue to sit, and the houses that are priced at a realistic market value, sell. People need to re-evaluate, and they need to listen to feedback. I mean, I have clients in that pocket, and I tell agents, “This is $300,000 more than they would even consider spending on it." But the sellers just aren't there, and they're not listening to it. So, I really do think this pocket is going to continue to hurt with inventory unless people start to become more realistic with where the market is today. Rant over!

Anyways, looking at Acton. So, we were at 24 active listings last week and we're up to 26. Acton is not going backwards and it is really hurting there. There were weeks in Acton where we only had two or three products available at the start of the year, and now we are at 26 without any sales this week, which isn’t good for those sellers. Glen Williams this week is finally coming down to where they normally are with inventory.  Last week, we had eight active listings, and we are now down to six which is a comfortable level for the Glen. There is not usually a lot available in Glen Williams, and we were sitting pretty high these past few weeks. Limehouse remains the same at two active listings, and the Rural market went from 26 to 21 active listing, which is big drop in the Rural market inventory this week.

Overall, I think this was a really interesting week. We're seeing a trend of buyers actually participating in the market, which is kind of confusing considering interest rates went up, but new listings have also hit the market. In the fall market, we always see an increase in listings and we saw that a bit in the summer but we didn’t see buyers being active. I had multiple situations last week where there were multiple offers, so it will be interesting to see what happens this fall. That being said, I think this is a strong start to the fall market – buyers are being active, listings are coming, and things are moving! When things don’t move, that’s when there’s chaos in the market. So, I will be back next Thursday! Have a great week!