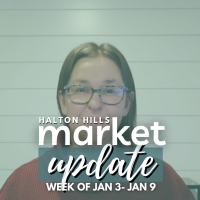 Hi everyone! Welcome to this week's Halton Hills housing update. So, our first week of January was pretty slow in terms of sales, but that’s what we were expecting. Looking at the numbers, in Georgetown last week, there were only 4 sales, which is a very low number. Something to note though – there were 14 new listings, which is a really high number for one week, but it’s not a huge surprise. Five of the 14 were properties that terminated last year and came back on the market this year. Every week when gathering the numbers I take out properties that terminate and go back on in the same week, but because these 5 terminated in 2022, I’m counting them as new listings. So five of the 14 have already been on the market at some point over the past six months. I think the trend of inventory spiking in January is going to continue through January because so many properties are going to come back on the market. There were a ton of terminations through October, November, and December, so it’s not a huge surprise to see some of them coming back on the market. With 14 new listings this week, inventory is definitely going up, but it’s also a snapshot of what were going to see in January.

Looking in Acton, there were two sales and for the first time in a long time, no new listings. In Glen Williams, there were no sales and one new listing. Nothing happened in Limehouse and the rural market had no sales and one new listing. In terms of active listings, all of Halton Hills was at 100 listings last week, and this week we are up to 110. This isn’t a major increase but it’s going to continue going up. If buyers are not purchasing at a quick rate and new listings keep happening, I think we may see over 150 listings by the end of January/start of February. We will watch that closely!

Out of all our markets, Georgetown was up the most, and it’s the one that’s either climbing or crashing- there’s never really an in between! So, last week in Georgetown there were 56 active listings. This week we are up to 67 active listings, which is a pretty big jump for one week. Inventory is still pretty low though when compared to the 130 we were seeing in July, but as it continues to climb, the market is going to be changing.

Looking at active price points now, under $800,000 is up from five to seven active listings. We have a couple properties between $700,000 and $800,000 now which we didn’t have last week. $800,000 to a million is up from 13 to 18 which is the biggest jump of all our price points. It’s moving here because it’s usually freehold products that are still under a million dollars. I think we will continue to see inventory climb in this price point for sure. One million to 1.5 million is up from 18 to 21 active listings. This price pocket had so many listings in it, over 50 at some points, and it will be interesting to watch. A lot of the homes that sold last year in this pocket is now selling well under a million dollars, so it will be interesting to see how this price point shifts. 1.5 million plus is the same story as it has been every other week. We had 20 active listings last week and now we are up to 21, which isn’t a huge jump. However, the properties over 1.5 million are just not moving. When I was looking at them today, there are so many listed over two million that I strongly believe won’t get that. The market just isn’t there. Yes, your neighbor got that price back in March but we are back over 20% since then. So, it’s really difficult to have a listings in this price point right now because there are very few buyers in that pocket. So, that’s Georgetown for this week. Again, it’s our main market and we watch it closely but it is definitely trending the way I thought it would, which is with inventory increasing.

Now in Acton, for the first time in months there are under 20 active listings. Last week we were at 21, and this week we are at 19, which is still high for Acton but it’s definitely a win for the sellers in Acton because we have been sitting at the 20 plus mark for months. There also wasn’t a ton of movement here last week. Glen Williams is down from 7 to 6 active listings. Limehouse remained the same at two and the rural market is climbing again. Last week there were 14 active listings and now there are 16. The rural market will slow down as inventory starts to climb in Georgetown, but there are a lot of rural properties for sale right now, which I believe start around 1.4 million, with the exception of maybe one property. Price points in the rural market are just higher so I think 16 is still low in comparison to what we were seeing but it’s definitely going in an upward trend as well. A lot of the properties that came off the market in the back half of 2022 were rural. It will be interesting to see if there is a spike in rural inventory over the next few weeks.

So, that’s the first week of January! Nothing that happened is a huge surprise but sales were lower than I thought they would be because it feels like there are buyers out right now. I think we will start to see sales pick up though. Buyers are still there- they just aren’t willing to overspend on a house. The cost of borrowing is so high that they have to be smart with it. We are seeing an increased number of conditions on sale of properties because people are just not sure what they are going to get for their house or if it will sell at all. So, I think in January we will see inventory continue to climb. We will keep seeing sales, but the overall trend will likely be inventory numbers rising. Anyway, I will be back next Tuesday to continue looking at January numbers. Have a great week!