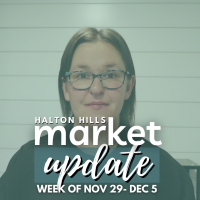 Hi everyone! Welcome to this week's Halton Hills housing update. We have lots of numbers to discuss today, including November numbers, so let’s dive in! I looked back at November of 2020 for this report, and normally I would just do year over year, but the market and pricing are starting to feel like we have essentially cancelled out two years of real estate influx, and it seems like we are correcting back to where we should be, and these numbers support it. So, I'll have a lot to talk about with November numbers.

In November of 2020, our average price was basically a million even, $1,000,244 to be exact. In November of 2021, so last year, we were up over 30% to $1,343,000. This year we are down to $1,000,057. So, we are basically back to where we were in November of 2020. The fall of 2020 is really when we started to see things spike, with that November being one of the first months that we saw our average pricing getting into that million plus range, and then it just kept going up. So, we are down 21% since last November, which again, is no surprise. We are down even more than that since the peak in March. Also, when I look at the houses that have been selling recently, the prices they’re getting are similar to what we saw in 2020, which could mean that 2020 prices are a good bench mark for sellers. Instead of sellers thinking “oh my neighbour got this in 2022”, they need to be thinking about what their neighbour got in 2020, which is a bit sad but it’s the reality of the correction that we’re seeing and I think we will continue to see into 2023.

Overall, we are down pretty significantly year over year and in line with where we were two years ago. Something to note here – there were only 52 units that sold in November. Last year was 67 and in 2020, it was 90. The market is certainly softening and there's tons of stuff to buy. So only 52 sales supports the fact that things are still moving, but not at a crazy rapid rate. Another thing to note, of those 52 homes that sold last month, only eight of them were over 1.5 million dollars. So, all of those lower ticket items are moving, but they're really bringing our average price point down and the higher ticket stuff just isn't selling, at least not as quickly. So, those are our November numbers! They're not really surprising and they're in line with what we've been seeing, but people just need to realize that our pricing is decreasing and we need to sort of erase the last two years from our mind and come to terms with the new market reality.

Looking at our weekly numbers now, Georgetown had eight sales which is in line with what we have been seeing each week. We also had nine new listings, so there’s some new stuff coming on to the market. We also had eight properties completely terminate and not re-list last week. So that is going to bring down our inventory levels a bit, which isn’t great for buyers but could actually be good for sellers. As inventory continues to drop, we may see more buyer demand because there are still people looking for houses to buy. It will definitely be interesting to see how the next six weeks play out. Acton had one sale and five new listings. Glen Williams and Limehouse didn’t see any sales or new listings, and the rural market saw two sales, both a million and under, and no new listings.

So, looking at active inventory, last week, all of Halton Hills was at 148 active listings. We are down this week to 142 active listings. We are definitely going in the direction that we would normally be going in in December. Georgetown had an interesting trend this week, as we were up a bit to 87 active listings last week, and now this week, we are down to 79 active listings. That’s a lower number for Georgetown, and if we continue to see those kinds of numbers, the market should continue to move. As a seller it might be a bit busier for the next six to eight weeks, than we've seen in the last six months, despite rates going up and prices coming down, because inventory generally continues to drop right now and it's just supply and demand. There is not a ton of demand right now, but when we have no supply, that will be impacted.

So, there were lots of numbers to go over today, but I think that what's happening week to week is certainly on trend with what we would normally be seeing right now. Again, we're seeing a lot of stuff come off the market which is skewing a lot of things. Normally we don't see so many properties just being like, “nope, I'm done, I'm coming off”, so it’s keeping inventory lower than we have been seeing over the last six months. I’m really not surprised with November’s numbers because they are in line with what we have been feeling. We know prices are going down, but the silver lining I guess is that we are up from last month in terms of average price. Last month our average price was $966,000, so under a million. Going back slightly over the million this month is good news, but we are definitely teetering, and these numbers are what we were seeing in 2020. So, as I’ve mentioned before, we need to realign seller's expectations because these numbers don't lie. For December, I think we are going to continue to see sales continue to slow, but I also think we will continue to see buyers being active. I also think we will see less and less new listings, and even more people coming off the market before Christmas, which will drop our inventory levels even further. I am really interested to see where inventory is going to be sitting around the last week of December and first week of January in comparison to last year. Anyway, I will be back with those numbers next week to see where we're trending in December. Have a great week!