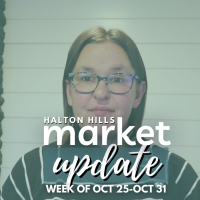 Hi everyone! Welcome to this week's Halton Hills Housing Update! So, I have October's numbers to report today, as well as what happened last week. There is a lot to talk about so let’s get into it! In October of 2021, when I think about it and look back, it was the month that we started to feel prices really start to climb. Our average price in October of 2021 was 1.29 million and we also sold 104 units that month, which is a very high number of units in Halton Hills, meaning the market was really moving last fall. I do think that it was sort of a precursor to what was about to happen in the coming months.

So, when we're looking at October of 2022, we all know we're in a very different market. Things have certainly changed; prices have come down but the numbers that I'm about to report for October 2022 are even shocking to me! I was like “are these right?” I know I have been talking all month about how under $1 million has been selling very rapidly. A lot of people's approvals have come back under 1 million, so that is the pocket where most people can buy right now. It makes sense that the bulk of our sales have been in this range. Inevitably, I also think that this is the biggest contributor to completely driving our average price down.

This month, October of 2022, we only sold 51 units. This is not a ton of units sold compared to October of last year, but our average price was $990,000. That is down 23% year-over-year and almost 13% since last month, which is a huge drop. It really doesn't feel like we're living in that market right now, it still feels really busy, so these numbers are surprising to me. But, the last time our average price in Halton Hills was under $1 million was in January of 2021, which was a very long time ago. I don't know if this is going to be an anomaly and I don't know if when we get to the end of November, our official average price will be under a million dollars, but it seems crazy and not what I was expecting. We saw three months of pretty consistent average prices between 1.1 million and 1.2 million, so to see the number at $990,000 is just shocking! I had to go back to the start of my book to find when our average price was under a million dollars. It's reflective of what's happening in the market in terms of prices coming down and it's reflective of how much is selling under that million price point and how little is selling over that million price point, but it just feels really bad! So, that is not a great update for October!

Anyways, let's look at what happened last week! So, looking at sales, Georgetown had 11 sales which is a good week in Georgetown, not too high, but not low. We only had nine new listings and we had a couple properties come off the market so not great news for inventory, which might drive prices up again, I'm not sure. Acton had two sales and two new listings. There were no sales in Glen Williams, and no new listings in Glen Williams. Additionally, no sales or new listings in Limehouse, but there was one sale in the Rural market, and two new listings. Something to note here - in all of October, there were no sales in Glen Williams or Limehouse and only one sale in the Rural market. These places typically have higher price points, but they had nothing sell in all of October, which is pretty wild.

Now looking at active inventory, last week we were at 157 active listings in Halton Hills. We are down this week to 150, so we saw a pretty dramatic drop considering how busy the market feels and the fact that people are still living on their pre-approval rates from August. I would've thought that we would see higher sales prices because of inventory coming down. So, there are lots of moving parts right now, I don't know what's going to happen, but inventory is continuing to drop.

So, Georgetown is down to 89 active listings from 94. The last time we were under 90 listings was in April of this year. So, our inventory levels are actually quite low, but a lot of the stuff over that million mark is sitting, especially over 1.5 million. Looking at our price points, under $800,000 went from 15 down to 14 active listings so not a huge change there. $800,000 to a million went from 17 to 15 active listings, so that is down slightly, and that pocket has certainly been getting bought up. This is the price point that's really moving and so 15 active listings is not a huge number in comparison to where we are with the other price points. One to 1.5 million climbed this week from 33 to 35 active listings. Again, this price point is struggling to move. There are not a ton of buyers willing to spend that kind of money on houses anymore. And 1.5 million plus went from 29 to 26 active listings. That was again, properties coming off the market but we are still sitting very high over 1.5 and not a lot is moving.

In Acton this week we remained the same at 23 active listings. Glen Williams remained the same at eight. Limehouse remained the same at five and the Rural market is down from 27 to 24 active listings. Overall, that is a shocking October to me. I don't know how this is going to translate to November. I did feel like the market was pretty busy and when we're looking at like units sold in September there were 61 units, compared to only 51 in this month, even thought it felt like a busier month to me. I'm just really confused with where the market is going and I don't think it's safe to say prices on all properties came down 13% last month, that's pretty dramatic. But what happens in November is really going to be a snapshot of where the market is going. It doesn’t feel like prices have come down 13% this month, but to see it on paper reinforces the fact that properties in the million plus market just aren’t moving.

Overall, I think this is a really bad update for sellers looking to sell in November because people are going to be looking at these numbers and they're probably going to be scared of where prices are going, and it's probably going to cause some buyer hesitation. So, that's enough of my rant today but it's just an interesting month to look at. And maybe this is the beginning of, you know, our prices really dramatically coming down or maybe this is sort of like a stopping point and things are going to stabilize because things feel pretty balanced right now with buyers and sellers. So, we'll watch each week and see any new trends but one thing that is for sure is that inventory is not skyrocketing, and I think that will help sellers now. Anyway, I’ll be back next Tuesday, have a great week!