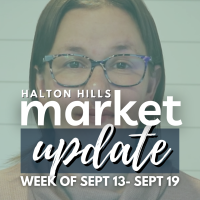 Hi, everyone! Welcome to this week's Halton Hills Housing Update. So, last week's numbers were very promising, but we are actually going in reverse here. Looking at last week's sales, Georgetown only had five sales. That is one of the lowest weeks of the year and is an insanely low number for Georgetown. We do have quite a bit in the sold conditional status but to only see five sales is not great news. Another notable number is our new inventory. We had 22 new listings in Georgetown last week. That is a very high number for new listings and that is a huge gap versus this week’s sales. This ultimately means inventory is going to be on the rise again. If you're a seller in the market right now, this is not the trend you want to be seeing.

Now looking at Acton - Acton was dead in the water for about four weeks and thankfully they had three sales last week. With that being said, this is more than the past few weeks but not great when compared to the number of houses on the market there. There's something to note though, and this is sort of a warning to sellers on where the market has come from to where it's going. I had a client, probably two and a half months ago, that offered on a property in Acton that just updated to sold this week. They offered $70,000 more than the sellers accepted last week and at the time, the sellers thought “no, I should be getting this crazy number for my house”. My clients weren't that far off of the asking price, but the sellers ultimately said no, and have now left $70,000 on the table. It just shows as a seller, if you have a buyer right now who is willing to even remotely negotiate an offer on your property, you should be taking that very seriously because the market is not going in a direction that's in your favor. Anyways, I digress. I just saw that and thought it was notable because everyone wants as much as they can for their house, but the buyers just aren't always willing to pay it and I'm sure these people are kicking themselves now. Looking at new inventory in Acton, there were only two new listings this week. So not a huge spike compared to somewhere like Georgetown, but we are sitting high with inventory in Acton right now. In Glen Williams, there were no sales and two new listings. Limehouse had no sales, and one new listing. Rural Markets also saw no sales this week but four new listings. So, all of these numbers, aside from Acton being slightly down, indicate that sales are slowing and inventory is picking up again and this is where we were around June and July, and we all know what happened to prices. So let's just see what happens, but I'm not surprised to see inventory climbing here, it's to be expected.

Looking at active inventory, last week, all of Halton Hills was at 148 active listings. This week, we are up to 166. That's a huge jump, 18 new listings, which is a lot for one week. So again, just a caution to sellers right now that the market is changing and it's not changing in your favor. Now looking at Georgetown, the inventory here is most notable. Last week, we were at 93 active listings and this week we're up to 107. So, we had a few weeks where we were under that 100 mark, but we're right back over to 107. Looking at our price points now, under $800,000 is up from 12 to 15 active listings. There is so much stuff available under $800,000, lots of condos and condo town homes. However, we saw a few freehold detached houses this week come up at $699,000 and are trying to hold off offers. It will be interesting to see if that strategy is something that's going to come back. $800,000 to a million is up from 23 to 26 active listings. Last week, I was so excited for the one to 1.5 million price point because we were over 50 and then down to 27 last week. It felt like this price point was moving again and things were changing, but we went from 27 to 35 active listings this week. So, inventory definitely climbed there pretty significantly. Finally, the 1.5 million plus range remained the same this week at 31 active listings, which is still very high for that price point, and very little is moving in this range.

Looking at Acton, there were 26 active listings last week and now we are down to 24, which is still very high for Acton. Glen Williams is up from six to eight active listings, which is still higher than normal for the Glen, but is definitely down from the craziness we were seeing with 12 or 13 listings a few months ago. Limehouse is up to three active listings and the Rural market is slightly up at 24. Georgetown and Acton are definitely sitting higher compared to where they would normally be and where we came from. It’s just interesting that we had such a good week last week, and now we are back up. This is telling me that we are probably going to continue to feel inventory rising and prices starting to come down again. So, one final caution to sellers – if you have someone willing to buy your property, I don’t think prices will be climbing any time soon, so you should really be thinking about your strategy because you don’t want to be kicking yourself. They typically say that your first offer will be your best offer, so try to take the buyers that are willing to put an offer on paper seriously!

Overall, I think this is the start of our inventory climb for the fall that will probably last until the middle of November if we follow the typical market trend. Around December people typically start to cool off and then we start all over again in January. I think this is the week however that we will look back and see the start of a climb. I’m super interested in seeing where these numbers are going to go, and can’t wait for next week. I will be back next Tuesday,  have a great week!