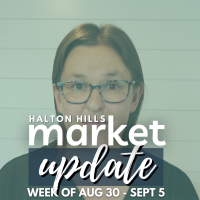 Hi, everyone. Welcome to this week's Halton Hills Housing Update. I have August numbers to report today and they are pretty good. August of 2021, we sold 81 units. This past August, we are down 28% to 58 units sold. This is just supporting what's going on in this market. There's tons of stuff to buy and the buyers just aren't buying it so we are down significantly year over year. The better news is average price, we are still up. We're not up from the last few months but we are still up year over year. August of 2021, our average price was 1,084,000 and in August of 2022, we're up over 6% to 1,151,000. So yes, we are down slightly. We were at 119, 117 the last two months. We're coming down slightly, but not like the one four to one two that we saw in a two month span which is good news. I do think prices, again, are going to hurt here this month because of the new interest rate announcement. But 68% is what our normal yearly increase was like back when we didn't have all this chaos. I still think we're going to see prices declining but it's not happening at the rate that I think buyers are hoping that it's gonna be happening, which is good news.

Last week in Georgetown, we had 10 sales, which is in line with what we've been seeing. Nine was that magic number so we're up from that. We only had seven new listings, so that is good. We also saw plenty of properties expire last week because it was the end of August and so inventory is down pretty significantly this week so a great start to the fall market. We needed our summer inventory to come down, it was sitting way too high. Going into what I consider the start of the fall market, I think it's really good news what we saw this week. In Acton, we only had one sale and one new listing, and in Glen Williams there was one sale, no new listings. Limehouse, no sales, no new listings. The rural market saw two sales and one new listing. Something I do want to touch on is Acton. Acton has been struggling a bit lately and there haven't been a lot of sales there. I know based on my business, people are willing to look in Acton when there's not a lot available in Georgetown or they can sort of get a deal compared to Georgetown, but that's just sort of not happening right now. There's lots of stuff in Georgetown to buy. Some of the prices in Acton are similar to what you can get in Georgetown. We're just seeing not a lot happening in the Acton market right now.

Here's the real talking point this week - our active inventory. Last week, all of Halton Hills had 164 active listings. This week, we are down to 154 active listings so we dropped by 10 units this week. When we were at the start of July, we were in the 190 range so we have seen inventory dramatically come down through the course of the summer, which it naturally does, but we really needed it. To see inventory at those levels is great news. Georgetown also really notable and really exciting is down to 94 active listings from 103. May the 2nd was the last time that we had double digit inventory. It has been three months of 100 to 140 listings in Georgetown and so to be at the 94 range is in a much more sweet spot. Looking at our active price points. Under 800,000 is down from 13 to 12, so all our price points are down this week. 800 to a million is down from 24 to 22. 800 to a million, there's so many good houses between 800 and a million right now. I can't believe how far we've come this year because you couldn't get anything for a million dollars in February, so lots of stuff. One to 1.5 million is down to 33 active listings. This price point was in the 50 to 55 range between May, June & July. This price point was hurting, so for it to be at 33 is really good news for the sellers in that pocket. 1.5 million plus is down from 28 to 27 active listings, so still a lot available. We are not seeing many houses sell over 1.5 million anymore. Those sellers are the ones especially that have to reevaluate their expectations and keep in mind if your neighbor got $2 million and we're down like 30% since then, your house is now worth under $1.5 million if we do those numbers. Those higher ticket prices are gonna come down once the sellers realize like no buyer is going to pay those prices for. They're not gonna pay 2 million bucks for a Georgetown South house anymore, it's just not gonna happen in this market. Over 1.5 is a huge struggle right now, those sellers are really hurting.

Acton remain the same this week at 24 active listings, which is a lot. I already touched on Acton but 24 in that market is a lot of houses. Glen Williams remain the same at eight. Limehouse is down to two and the rural market remain the same at 26. Overall, I think this week's update is pretty good, and in hindsight, August was not bad. The back half of August was especially strong. These August numbers, I'm happy with, however, sales are still really low. What's sort of saving us is those people taking their houses off the market that don't need to be selling or aren't getting the prices they want, that's helping inventory come down. The real notable is definitely where inventory is sitting, it's still insanely high compared to where we were. There were weeks where we were in the thirties and forties for all of Halton Hills. We're at 154, it's still really high but it feels way better than where we were. The fall market is underway, and we have a new massive interest rate announcement so we'll have to see what happens here. I'll be back next Tuesday, have a great week everyone.