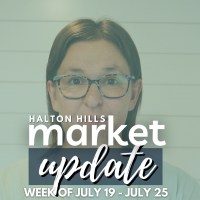 We had a terrible week with numbers, so we're gonna just take a look at this. In Georgetown this week, we only had six sales. That is a horrific number for Georgetown. The last time we had six sales was the last week of December, and we only had 12 available listings in Georgetown. There was basically nothing to buy, which is why sales were so low. Now we have 125 listings in Georgetown, so 10 times the amount of inventory. There's tons for people to buy, but they're not buying it.

The market that is getting hit the hardest right now is Georgetown. I mean, that's always been the case, but right now, if you have a listing in Georgetown, you are certainly feeling it. The other markets, the listings are just not really moving, so you're still feeling it as well. The sales numbers are basically nothing. You're feeling that pinch, but you're not seeing as much competition hitting the market. It's a little bit different in the secondary markets, but overall really bad numbers. I was hoping that we would continue to see, for a couple weeks we saw the trend of low listings, and that just wasn't the case last week. I don't know, I can't predict anything anymore, guys. All I know is that the buyers are not pulling any triggers. Open houses are busy, but not a lot of showings, and it's just a weird market out there. We're gonna continue to watch it. Next Tuesday, I will have July numbers, which are gonna be really interesting. They're gonna be low, I can tell you that right now. I will be back next Tuesday, have a great week everyone.