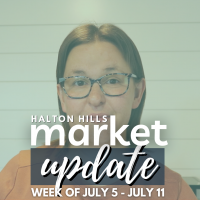 Not a great update this week. I was sort of in a promising state last week where I was hoping that we were seeing the start of inventory coming down, but that was not the case. Looking at the numbers, Georgetown this week only had nine sales, which is pretty low. Seeing under that 10 number is always not great. We had 21 new listings, so again, this is the big problem. Last week, it was so quiet, and I think it was just that last-week-of-summer situation that we were in. Interesting in terms of sales overall, Acton, Glen Williams, and Limehouse all had no sales this week. In all of Halton Hills, we only saw 11 sales. Acton had no sales, but it had six new listings, so inventory's up there. Glen Williams, no sales, no new listings. Limehouse, no sales, no new listings. The rural market did see two sales and two new listings, which means we were balanced in the rural market this week. Overall, really, really bad sales numbers.

Now looking at active inventory, all of Halton Hills is up to 193 active listings. This is the highest number that we have seen. We are slowly but surely pushing that 200 mark. Last week we were at 183 active listings, so we're looking at a big jump this week. Georgetown is up to 121 active listings from 115. Not a massive jump but definitely still going in the wrong direction. Looking at our price points, there's so much stuff available under $800,000. A lot of it is townhouses and condos, but there's a few freeholds. This week that price point is up to 15 active listings from 11. $800,000 to a million is actually down slightly. It had 30 active listings last week, and this week it has gone down to 26. A million to $1.5 million is back into the fifties. We were at 48 last week, and this week we're up to 52 active listings. Lots available in that price point. $1.5 million-plus is up to 28 active listings from 25 last week. Not a huge jump and definitely down from the really high numbers we were seeing in the thirties. A lot of the stuff is hovering between $1.7 and $1.4, but I mean, obviously the $1.4 is already under the $1.5, we're seeing those $1.7 products coming down to, like, $1.499, pretty quickly. There's a lot of movement in these price points, and so a lot of stuff is coming under that $1.5. Acton this week is up significantly from 19 to 24 active listings. Glen Williams is down. There was a termination, so it's down to 11 active listings, but still super-high. Lots of good stuff in the Glen. It is so weird to not see stuff moving in Glen Williams. It's the place that usually moves really quickly. This is just a sign of what's happening in the overall market. Limehouse remained the same this week at three, and the rural market remained the same at 34 active listings.

Last week I thought maybe it would be the start of the summer listing slow-down, but it is not looking like that was the case. I do hope in the coming weeks we stop seeing listings coming up so that we can sort of get into a balance before the fall market. We're just going to have to watch these numbers closely because every week it's like, what's going on? Eventually we start to see a trend, but right now the trend is still that we are going up in inventory. Last week was maybe just a blip because of the long weekend. I will be back next Tuesday with this coming week's numbers, and hopefully we start to see a slow-down in listings and a pickup of sales, but not sure what's going to happen with the interest rates going up and how that's going to impact everything. Have a great week, everyone.