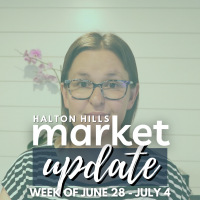 This week I have June's not great numbers to report as well as an interesting week in our sales, so let's take a look at the numbers. In June of 2021, we were in a very busy market. At that time, we sold 106 units. This past June we are down 28% to only 77 units. Why this is important and is showing what's going on in our market is based around active inventory. In June of 2021, we were sitting between 70 and 80 active units in all of Halton Hills in that month. It's not the lowest we've seen, but there was very little to buy and buyers were still scraping at the listings that were coming up. This June, we were sitting between 170 and 190 active units this month. There was tons of options for people to buy, but they just weren't buying them. There's no huge surprise given the slow sales weeks that we had that the sales numbers in terms of units are very low. The real conversation though is around pricing. In June of 2021 our average price was $1,150,000. Last month was the month that we really started to feel the hit in terms of our average price. We were down to 1.269, which was down around 12% since March. This month we are at $1,177,000 which is down 18% since March. Everyone that wants to sell their house for what price their neighbor had gotten in February and March, you need to take 18% off that price. We are only up 2% year over year. Our average price this June versus last June is virtually the same. It's only $27,000 difference, so our prices are coming back big time.

I've talked about this in the last few weeks about how people's buying power because of where interest rates are is significantly backwards. The interest rates are causing people to be able to spend two to $300,000 less. Seeing these price points come down is no huge surprise. I didn't think we'd be at par to last year. It is scarce out there with buyers and the sellers need to really adjust their expectation in terms of where their properties are going to sell because these numbers don't lie. This is where the whole market is at and people are taking way less than they ever imagined they'd be taking for their house based on what happened at the start of the year and the numbers this month just scream that like you just need to be more realistic of what you're gonna get for your home right now. The ship has sailed and we're back to declining prices for sellers and we are in a full fledge buyer's market that is for sure. With all that being said, there was some good news for sellers in terms of the sales that happened last week. I think this week might be the start our summer cool down in terms of listings where we really start to see a balance.

In Georgetown, we had 16 sales which is a decent number and is in line with what we've been seeing. Interestingly, we only had 11 new listings so that is down from our sales, but it's also a very low number compared to the week we saw over 30 new listings in Georgetown. Naturally in the summer, this happens just about every year and hopefully we will follow a normal trend. We stop seeing people list their homes unless they have to in July and August, but buyers are out there and they still want to be moving. As we stop seeing such a crazy influx of listings, we're going to start to see things level out and this week could be the start of it. Maybe, maybe not, but it'll be interesting to see sort of how next week's numbers pan out if it continues on the same trend. Acton had three sales and seven new listings. That is higher for Acton, but the overall market is still showing good news in terms of where the trends are going. Glen Williams had no sales and one new listing. Limehouse had no sales and no new listings. The rural market had one sale and five new listings. When I follow the trends, Georgetown is our main market and it's a real indicator of where things are going to go. For it to have a week where our inventory was way less is good news for returning to some predictability and balance. It's not gonna be at the price points that people are expecting, but a little more predictability would be really nice right now. Overall active inventory is down this week from 188 to 183 active listings in all of Halton Hills, which is still sitting super high, but is down. It seems like we're in this stabilized area in that 180 mark.

Georgetown this week had six properties that terminated off the market and didn't re-list. With our high sales, our inventory is down significantly this week. Georgetown has 115 active listing, which is down from 126 active listings. Looking at our active price points, under 800,000 remains the same this week at 11. 800 to a million drops this week from 34 to 30 active listings. We saw quite a bit transact in that price point this week, one to 1.5 million is down slightly from 49 to 48 active listings. So not a huge drop. And again, that pocket I find is the pocket where people are expecting crazy money for their house and unjustifiably high. Yes, it happened at the start of the year, but a lot of these houses should not be getting like north of $1.2 million. We all thought it was crazy when it was happening and it's coming back down and that pocket is sitting really high because people are holding onto hope that they're still gonna get what they want. The price point that took the biggest drop this week was 1.5 plus, that went from 32 down to 25 active listings in that price point. There's still some big ticket buyers out there. I think only two of the six that came off the market were in that price point. We had some good sales and things are moving in that price point. Acton this week is up from 16 to 19 active listings, not the highest week we've seen, but pretty high inventory in Acton. There's some really good stuff there, but there's some stuff that's just been on the market for a long time. Again, they're trying to fetch Georgetown prices in Acton, which just people need to be coming back on their price points. Sellers need to realize the buyers are not willing to spend the money that they were spending. Glen Williams this week is the same at 12 active listings which is very high for Glen Williams. I've never seen the inventory levels that high in that market, and there's tons of great stuff available. Limehouse has three active listings and the rural market is up to the highest number I think I've ever seen, 34 active listings in the rural market. There's some big ticket stuff that just isn't gonna move as fast naturally, but an interesting thing is we do have quite a bit under 2 million in the rural market and even under 1.5.

Overall, our price points are way down. We are essentially at par with what we were at last June. We almost need to delete from our brains all the stuff that happened and we need to realize that the buying power of buyers has been dramatically negatively impacted by these interest rates. Although a buyer may wanna spend $1.5 million on your house, they really can only get approved for that 1.3. Everything's gonna have to come backwards. It's just not realistic to expect the numbers that we were seeing. Everyone's just gotta kind of shift their expectations here. I feel like June numbers were a bit doom and gloom, but the numbers that we saw on our weekly update were sort of promising. I mean, this is what I was hoping would happen in the summer is that we would stop seeing such an influx of inventory hitting the market and we would see over the summer, the buyers are gonna buy through that inventory. Hopefully we can go into September and October with a more balanced, predictable and stable market. That's my hope, but we'll see what happens!