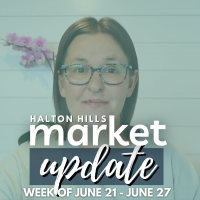 The numbers are definitely still in favour of the buyers. It is not improving in terms of anything going backwards for the summer. In Georgetown this week, we had 10 properties sell & only one of them got over asking. Last week I made a comment that I felt like overasking was going to be something that’s sort of obsolete soon, and I think that’s definitely the case. The one that did get over asking was a $599 land value sort of situation and it only got 50,000 over asking. It was a unique one. When we look at it, the regular resale properties last week, nothing got over asking. Interestingly, there was 24 new listings in Georgetown last week so there’s a huge amount of new listings coming on the market but the sales are not picking up.

In Acton last week, we had 5 sales which is actually a very good number for Acton. There was quite a bit of stuff available and we only had one new listing. Acton is really the only market last week that had sort of a ‘big week’ but it was still not the craziness that we should be seeing with this much inventory available. Glen Williams had no sales and 2 new listings. Limehouse had no sales and 1 new listing. The rural market had one sale and three new listings. Overall last week in all of Halton hills, we only had 16 sales. In the peek of the market, we were seeing 35-40, so given the fact that we have tons of stuff to buy and we’re only sitting around 16 sales is not great.

Now looking at active inventory. This week, all of Halton hills is up to 188 active listings. We are pushing very close to that 200 mark. In January of this year, there was 29 active listings. This just shows the change we’ve seen in the past 6 months. Georgetown this week is up to 126 active listings. Again, back in January, we had 11 active listings in Georgetown so this shows the difference between buyer demand then and now. What’s really interesting is when I did my market update this week, there was so many properties that completely terminated and came off the market. They either suspended or terminated and did not come back on the market at a lower price or anything like that. They have tested the market for whatever reason and have decided ‘we’re not going to sell right now’, and because of this, our inventory didn’t climb by those 14 units between our sales and our new listings.

Now looking at our price points. Under 800,000 is up this week to 11 active listings. The interesting thing is there are 3 freehold detached homes Georgetown under 800,000 right now. Back in February, we would have thought this scenario would never happen again, but here we are. We are starting to see those price points really come back down. 800 to 1 million is the category that jumped the highest this week, so it went from 28 to 34 active listings. A lot of stuff that was over that million mark is starting to come down in the 950-999 range, so that price point is definitely starting to feel some saturation. 1 million to 1.5 million is down slightly from 51 to 49 active listings. Although it’s going down, a lot of that is just movement of stuff in that pocket going down under that million, so we’re seeing a bit of a shift there. 1.5+ is down from 33 to 32 active listings this week, so not a huge jump but still a lot of stuff available in that price point. It’s been very interesting to see what’s happening here with our price points, but the theme overall is there’s tons of stuff available.

Now looking at Acton. They are down this week pretty significantly. They had 3 properties that terminated, plus a really high sales week so they are down from 23 to 16 active listings in acton, which is still very high but sort of good news there that we saw things really drop for sellers because they are scrambling right now. In January there was 6 properties available in acton, so again, we’re almost triple the amount of inventory there. Glen Williams had the highest number I’ve ever seen in the Glen. It is up from 10 to 12 active listings. There are some really nice properties available there and usually the Glen is a hot commodity, so it’s interesting to see inventory sitting so high there. In January we only had 1 property available in the Glen, and typically with these market updates the last few years, for us to get to 4 or 5 was sort of sitting on the higher end there. Limehouse is up to 3 active listings - in January they had no active listings. Limehouse definitely isn’t the market to have the same amount of volume transact, but it’s three times what it was is January. The rural market is up to 31 active listings which I don’t think we’ve ever seen. In January we were at 11. This is just showing how far we have come - to go from 29 listings in all of Halton Hills to more than that in just our rural market is pretty crazy. I don’t think any of us thought it was going to happen this quickly and this dramatically, but 6 months and it all changed. I thought maybe we’d see these kind of numbers by the end of the year, but it’s a completely different market right now.

Next week I’m going to have June numbers. They will be really interesting. Based on what we’ve seen, our units will be significantly down, but I’m interested to see what the price points will be like in comparison to May. I still know we are up significantly from last year, but while we analyze these numbers, it’s interesting to see how it all plays out.