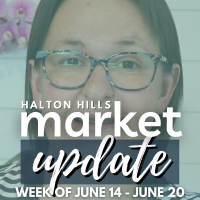 The numbers this week are kind of back to the trend we were seeing but still a few silver linings to look at. In Georgetown this week we only had 11 sales which is not a very big week in terms of sales. Weirdly enough, two of them still got over asking. That number is gonna be something probably that becomes obsolete. I don't know when, but it feels like sooner than later. The bad news is there was 17 new listings in Georgetown last week. That means inventory is up. The numbers are just continuing to climb here. Georgetown again, is the market that's really, really feeling what's happening with this inventory. It just doesn't seem to be stopping. Last week felt like this glimmer of hope, so maybe we are getting to the point where it's stabilizing a bit but the trend is still in favor of buyers here. It's pretty crazy how hesitant buyers are to be transacting in this kind of unpredictable market. Now looking at Acton, we had four sales and four new listings. Glen Williams had one sale, one new listing. Limehouse had no sales, no new listings. The rural market had no sales but it did have three new listings so that market's gonna be up this week.

Now looking at active inventory, we're kind of back to where we were. We're at 185 active listings up from 176, so not some of the biggest jumps we've seen. Last week had this moment of, "Ooh maybe this is where we start to really stabilize." I'm really hoping we can keep those inventory levels under 200 and I do think we're gonna get into a balance here as listings stop coming up in the summer which they naturally always do. I'm really hoping that things can become a little more consistent on a week-to-week basis. Georgetown, this week is up to 121 active listings from 114, so not the highest number we've seen but it's still just continuing to climb and not just balance here. Looking at our price points, all of our price points except for one are up this week. Under 800,000 is up from seven to nine active listings, all but one of those are condo town homes. There is a freehold on for 799, so if you're looking at that, there's one that exists under 800 right now and it might actually stay under 800. 800 to a million. This is the price point that took a big jump this week. It went from 21 to 28 active listings. We did see quite a few properties that were sort of hovering over that million bring their price points down under a million so that's playing another factor into why that price point is higher, but there's just a ton of options under a million right now. 1 million to 1.5 million is back up over the 50 mark so we're up from 48 to 51 active listings, but this price point seems to be getting some traction lately. 1.5 million+ is the only price point that came down this week. It went from 37 to 33 active listings. Another factor that played into this is there was a bunch of properties that were over 1.5, 1.6, and they came down under 1.5. We sort of shifted some of our inventories this week. Our higher ticket went down to the next price point and then that million to one and a half, some of them came into that lower price point. We're seeing a lot of price reductions out there. We're seeing people having to shift what they're expecting to get for their house, and so it's reflective in the fact that our price points, they're moving downwards so they're going up, if that makes sense. All right.

Overall Georgetown's still the market that's really feeling the impact of what's happening. Acton remained the same this week at 23 active listings, Glen Williams stayed the same at 10, Limehouse stayed the same at two. The rural market did increase this week from 27 to 29 active listings. This is, I think, the high. I don't think I've ever seen the rural market get to 30 active listings and I think that next week or in the coming weeks, we could get to that. Overall, no huge dramatic changes. Inventory just still is slowly climbing. We're still seeing some sales out there. There are still buyers there's just a lot of hesitation. June numbers will be interesting 'cause we did have a big week last week. The market's not totally dead, it's just the sheer volume of listings we have right now is pretty crazy.