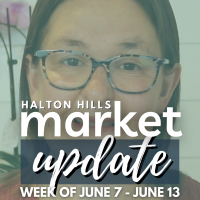 I think this week's update is pretty interesting. There's some changes that might be indicating that buyers are kind of past letting the dust settle here and might be thinking about reentering the market, so let's talk about the numbers. In Georgetown this week, we had 21 sales. I have been talking for weeks how we sort of stabilized there between 12 and 16. This is the first time since the middle of March that we have seen over 20 sales in a week in Georgetown. That means that there are buyers entering the market. We saw things sorta stabilize, and now to see such a jump compared to what we've been seeing for two months. I know interest rates are pretty scary and people are all over the place, but the biggest thing is that buyers have been so hesitant and they just haven't been moving forward on buying properties, and so 21 sales this week shows some promise that buyers are starting to shift. Five of them also got over asking, and we are certainly in a market where majority of properties are not holding off offers. I had multiple clients this week in multiple offer situations again. This is all gonna just go back to how it was, but just that glimmer of hope that buyer confidence is coming back is really promising. In terms of new listings this week, we only had 18 new listings in Georgetown, so you know what that means - inventory's actually gonna be down this week. Acton this week had three sales and five new listings. Glen Williams had no sales and three new listings. Limehouse had one sale, no new listings. The rural market saw no sales and two new listings.

Let's talk about active inventory this week. Last week, we were at 181 active listings in all of Halton Hills. This week, we are actually down to 176. This is actually a really high number for all of Halton Hills. It means that our buyers have tons of options, and to see it sorta stabilizing around this point is interesting. I mean, we'll see what happens next week, it could spike right up again, but maybe our pocket is sitting under that 200 mark in all of Halton Hills so that people can really start to feel comfort and balance in our market. Georgetown this week took a big drop. Last week, we had 124 active listings. This week, we're down to 114 active listings. I think we had two or three properties terminate off the market, but we also had more sales than listing, so it's just going to naturally happen. All of our price points this week are actually down, which is the first week in a very long time I can say that. Under $800,000 is down from eight to seven active listings. Majority of those are condo town homes. $800,000 to a million is down from 24 to 21 active listings. The $1 to $1.5 million is down from 53 to 48 active listings. Last week was the highest we had seen in that price point. That price point was just getting so much inventory for the last 10 weeks. $1.5 million-plus is down slightly to 37 active listings this week. This past week was the first week in a long time that we saw multiple properties over $1.5 million selling. What we saw was a lot of them selling at significantly lower than what they had originally listed at. I think one of them was $600,000 less than what they originally listed at.

Now looking at Acton - they are up this week to 23 active listings. When I pop open my listings, normally, Acton would be just a few rows. It took up the full page of my first screen, and I was thought, "Oh wow." There is so much stuff available in Acton right now, so take a look if you've been thinking about buying there. Glen Williams, I think this is the highest number I've ever seen in Glen Williams. There's 10 active listings in Glen Williams. There's some really good listings there right now and some stuff under $2 million, which is sometimes harder to attain in Glen Williams. Limehouse remains the same this week at two active listings, and the rural market is up slightly to 27 active listings. Overall, what I'm seeing is, now that the interest rate announcement on June 1st happened and the election is over, people are getting back into the mindset of buying if they were there. Like I said, I saw multiple properties with multiple offers this week, and a lot of the stuff is mostly that lower price point that's still getting the multiple offers. There's just parts of this update when I look at the numbers that show a promise that our buyers are returning to the market, which is going to give us a more balanced situation. It's not healthy for us to have no listings. It's not healthy for us to have 250 listings. We just need to be in this pocket where things are listing, it might take a few weeks to sell, but overall, we just need to be in a consistent balance. This week feels like maybe we're starting to see the first signs of that, which is good news.