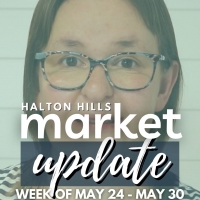 No real change this week. Inventory is continuing to just skyrocket. This week in Georgetown, we only had 12 sales. That is a pretty low number for Georgetown. We haven't been seeing a ton of sales overall considering how much we have available, but only 12 sales is very low. Weirdly enough, five of them got over asking. There is still stuff that's getting traction and moving, but overall, it's pretty dead in the water. The bad news: there was 26 new listings, so that is a huge gap. The jump in inventory week to week is just blowing my mind. At some point, it will stop, I just don't know when. I never thought 'inventory's gonna be here & we're gonna have options', and now we need these options to pump the brakes, but we're just not feeling that yet. Acton this week only had one sale. There's a ton of stuff available in Acton, and there was four new listings, so inventory's up. Glen Williams had two sales, which is a big week for Glen Williams, and only one new listing. Limehouse had no sales and no new listings. As for the rural market, we've been talking about how it's the one spot that hasn't really felt the influx of inventory, but guess what? This week that changed. There was one sale this week, but seven new listings, which is a really big number for rural.

Now looking at active inventory. Gosh, have we come far here. Last week, we were at 158. We are up to 172 active listings. At one point this year, we couldn't get over 30, 40 active listings in all of Halton Hills. Georgetown is up to 115 active listings. When we look at our price points in Georgetown, under $800,000 is up from five to seven active listings. 800 to a million is also up from 23 to 27 active listings. There is a lot of stuff sitting under that million-dollar mark. There was a time this year when I had clients, and I thought, 'I don't know if you're gonna be able to get a bungalow at any point this year under a million dollars'. Now there's some sitting at $900K. We have seen a major fall here, and this price point is really feeling that as well. One of the price points that has been saturated and really hurting is that million to $1.5 million. It's actually down this week from 49 to 44 active listings. We did see a few in that price point come off the market, but overall, good news, I guess, for that pocket. $1.5 million-plus is up pretty significantly this week from 31 to 37 active listings. The difference with this price point versus the other three is, stuff is still transacting in those price points. $1.5 million-plus, we are seeing very low sales, and you are very lucky if you are over that pocket to be getting offers and showings right now. Now looking at Acton, numbers are up this week to 22 active listings. Again, crazy-high number for Acton, and majority of those are under the million mark. There's actually some really nice things available in Acton right now. I talked about this last week, the price gap between Acton and Georgetown is quite low right now, and a lot of times when Acton is really busy, it's because you can't get anything good in Georgetown, so people are kind of willing to do that 12- to 15-minute drive. Now that Georgetown's inventory is sitting so high, Acton is gonna start feeling this as well. Glen Williams is down this week to six active listings, which is still pretty high for the Glen. Limehouse remained the same at three, and the rural market took a big jump from 20 to 26 active listings this week. Rural has sort of been this anomaly, where we haven't been seeing major jumps, and this week that changed.

Overall, the inventory picture is not getting any better for sellers, and there's tons of competition out there. You just need to be really attractive in what you're offering to the buyers that are actually playing in this market right now. There's not a lot of them, unfortunately. Next week I'll have May numbers, and we're gonna be down big-time, I can already feel it. Last year, we were over 100 units, and this year, we'll definitely be under that. What will be interesting is to look at our price point overall, especially compared to the previous months of this year. We have definitely come down in pricing. Some things are down about 20% already. I think we're gonna stabilize at some point here, we're just in a really, really messy in-between. It all happened so quick that a lot of people were taken by surprise, but once we can sort of get those weeks where inventory isn't climbing at such a significant rate, I think we are gonna stabilize here, but time will tell. To mix with that, we've got the new interest-rate announcement to consider as well. Overall, the market is definitely cooled, and it's just totally different than it was three months ago. I will be back next Tuesday with May's numbers. Have a great week, everyone.