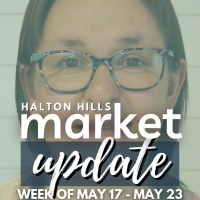 The story's remaining the same here with inventory continuing to climb. Sales are still sort of there, but they have definitely dropped off, so let's look at the numbers. In Georgetown this week, we had 18 properties sell, which is the highest number we've seen in quite some time. The last time we saw that many sales was in the middle of March, so maybe the market's going back. We had 18 sales, so it means some buyers are still there, but again, with some options, we're just not seeing the kind of sales numbers that we were seeing. Another interesting thing is only three of those 18 got over asking. Majority of properties right now are really coming down in pricing, and so there's negotiating room for buyers. Unless someone is severely under-listing a property, chances are they're not gonna be getting those crazy over-asking. The other news is there was 25 new listings this week, so that means inventory's up. In Acton this week, there's tons of stuff available, and some good things in varying price points right now. I'm surprised the sales aren't higher in Acton. There was two sales and two new listings. Something that happens with Acton, and it's sort of like the rural market, is they slow down a bit when Georgetown has inventory, because if people can get a similar product in Georgetown, they don't necessarily need to go out to Acton. Right now with where price points are, I think we may continue to see Acton's inventory climb, because there are Georgetown options at similar price points, but this will be interesting to watch. Glen Williams had no sales and one new listing. There was no sales and no new listings in Limehouse, and the rural market had two sales and four new listings, so inventory's gonna be up.

Now looking at our active inventory. Last week, all of Halton Hills was at 151 active listings. This week, we are up to 158, so it just keeps on going up. In Georgetown this week, we have 108 listings, up from 103. That number is super-high, but for three weeks in a row, we were seeing very big jumps, like double-digit jumps from week to week in terms of inventory, so this week to only see five, maybe that's a silver lining. Looking at our price points, they were all up this week. Under $800,000 has five properties available. They're all condo or condo town homes. It is becoming increasingly difficult to get anything freehold under $800,000 still, but I think in the next month we're gonna start to see some freehold options coming under that $800,000 threshold, which is great news for buyers. $800,000 to a million is up from 21 to 23 active listings, and tons of stuff is available in that pocket. Lots of townhouses and Delrex-area bungalows sitting on the market right now. One to $1.5 million is up from 46 to 49 active listings, so we're almost hitting that 50 in that pocket, and almost half of those are in Georgetown South. There is a lot of inventory in a small area, but there's just tons of stuff to choose from. In that pocket, we're really starting to see the price points coming down, because there's just so much stuff available, that to be competitive, people are having to drop their price. So, watching that pocket pretty closely. $1.5 million plus, we are up over 30 this week. We're at 31 active listings from 29. That pocket wasn't really feeling a ton of inventory influx, but the last few weeks we're seeing it climb, and not a lot of stuff is transacting above that 1.5. We're getting a handful every week, but that is really a price point that is not getting a ton of showings and not getting a ton of activity. There's so many buyers right now are like, should I wait? And there's a lot of buyer hesitation right now.

I think at some point, we're gonna stabilize here. Once we get through the inventory of people that need to sell their house because they bought something else, I think that's when we're gonna start to stabilize, and I think that's gonna start happening soon. In Acton this week, we remain the same at 20 active listings. Glen Williams is up slightly to seven active listings, but you need $1.8 million to start there. Limehouse remains the same at three, and the rural market is up from 19 to 20. We're seeing a very slow climb in the rural market, but it's definitely coming. What I find with rural, though, we've seen a lot of stuff come off the market in the rural area. People, I guess, are testing the waters, and it's just not panning out. As numbers climb there, we're gonna see more of that. Overall, this market is continuing on the trend that we've seen for the last four weeks. There is definitely some seller urgency on certain listings out there. There are a lot of listings where the sellers have bought a property, and they need to sell their homes, and so they're taking numbers that they never would've imagined when they listed that they would be taking. Things have really done a major 180 here, and it's almost like a messy pocket where there's a lot of unpredictability around prices.

The biggest concern for any listing right now is just the low number of buyers that are in the market. It is shocking how few showings the listings are getting right now. I am super-interested where the main numbers are going to end up. I feel like prices have come down like 15 to 20%. I can't wait to see how the numbers wash out at the end of the month. There's still been some bigger sales, but a lot of stuff is getting $100,000, if not, $200,000 less than they would've been getting a few months ago, so big changes are happening. And like I said, if you are a buyer, now's a really great time to be thinking about getting into the market. Also, I have three listings coming up that the people are opting to list now before they buy, because they're confident there'll be something on the other end, so things are certainly changing. For the last two years, if someone was like, "I want to sell first," I would've been like, "Ooh, you might be homeless" but now there's that confidence in where the inventory levels are that if you can sell your house right now for a number that you're happy with, that there will be something for you to buy on the other end, 'cause there's just so much stuff to choose from right now. There is a really interesting shift in the market overall that we're continuing to watch. May numbers won't be in for another two updates, 'cause next week is May 31st, but I cannot wait to see how those compare. So I will be back next Tuesday. Have a great week, everyone.