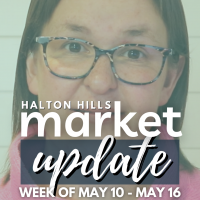 Welcome to this week's Halton Hills Housing Update. We are just getting slammed with inventory. I cannot believe the numbers this week, so let's have a look. In Georgetown this week, we had 15 sales. Again, totally stabilizing on that number. It's like 14, 15, 16, the last four weeks, so we are really kind of at that this is how many houses we sell every week. Interestingly, 11 of them got over asking, so that's kind of a surprise to me, but there is a lot of stuff sitting. My guess that shows that anything new and good is still gonna fetch that bidding war and the competition. But right now, our sales are just very low and our inventory is very high. Looking at new listings - 23 new listings in Georgetown this week, so again, inventory is just continuing to climb and the sales are officially like not even close to keeping up with the new inventory coming on the market. Acton this week only had one sale, which is crazy for how much is available there, and five new listings, so that is, again, just showing that things have totally taken a 180 in Acton as well. Glen Williams this week had one sale and two new listings. Limehouse had no sale and one new listing and the Rural Market had two sales and four new listings. Overall, our sales are not high. We have tons of stuff available and it is just not selling, so really interesting shift.

Looking at active inventory. Officially, we have hit the highest number I have ever recorded in these market updates. We jumped this week from 138 active listings in Halton Hills to 151 active listings. There are a lot of active listings right now. Georgetown is officially over that 100 mark. We are at 103 active listings. If you remember, like the start of February, I was talking about how the highest we had seen in like a year was 103 active listings in all of Halton Hills. Georgetown is up from 96 to 103 active listings this week, so Georgetown is really feeling things right now. If you are a buyer, seriously, start looking, like there are deals. I can't believe the prices, so get in the market, buyers, before interest rates go up. I know all the buyers wanna see how low this is gonna go, but before interest rates go up, so I would take another look at what's available right now 'cause there is some really good stuff at some good prices. Now looking at our price points. This is an interesting look this week at our price points. Under 800,000 went down slightly to seven active listings and 800 to a million stayed the same at 21. That lower price point is not feeling the kind of saturation that the higher ticket stuff is. It's still saturated compared to what it was, but it's not as intense and those price points are still moving. When we start to feel a cool down, it usually starts from the top down and that is exactly what's happening now. Under a million, we're still chugging along, like, it's not selling the way that it was, but things are still sort of moving in those pockets. Now, one to 1.5 million, this price point really has a lot of stuff available. It is shocking to me when I look at this pocket, but I mean the good news it's down slightly this week. Last week there was 47, this week there's 46, so it's slightly down, but that is still very high for that price point. Where we weren't feeling a huge jump was 1.5 plus, but this week it took a pretty huge jump. We saw a lot come up, it was at 20 last week. This week we're up to 29 and the stuff in that price point is really struggling to move. It is just sitting there and that is gonna start coming down really hard and it's gonna continue to trickle down, but there is a ton of our big ticket items available. And you know, there was stuff that we thought it was crazy that it was getting two million in Georgetown South in February and just people are still kind of holding on to those expectations, but they really need to reevaluate.

The buyers are simply not there and they're simply not willing to pay like two and a half million dollars for a subdivision house. It's just not gonna happen right now, so really interesting stuff happening with Georgetown inventory. Acton is up this week to 20 active listings. I think that's the highest number I've ever seen in Acton with these market updates, so from 16 to 20 this week. Glen Williams is up to six. Pretty high number for the Glen. Limehouse is up to three, also a high number for Limehouse. Those pockets don't get a lot of listings, so when they do have them, they're pretty high, and then the Rural Market remained the same this week at 19 active listings, and that is because we had a bunch of stuff come off the market this week. When we're looking at our terminations, re-list, all that stuff, we had three properties that just re-listed at the same price to spice things up again. 10 properties dropped their price, so we're just like, you know what, we're not getting it, we need to drop. Five properties completely came off the market. That's why we have the same rule, like we had new listings, but our inventory is the same because some came off the market, and then, comically, there was one that dropped to a lower price and is gonna try again with an offer night, even though offer nights are literally just something that should be just gone by now, like these numbers, nothing about these numbers say you should try an offer night, so I mean, there are still some things getting over asking, and I think, naturally, if it happened to a property this week, they listed it, they didn't hold off offers, but I went through it and I was like this is worth way more than it's listed for, in my opinion. And it naturally got that 150,000 over asking.

The buyer urgency is literally out the window. The stuff I'm seeing on my listings this week is unreal, like buyers are in control right now and they are feeling no urgency to be making a move. We are just in a crazy market. I said to my husband if you had told February me that this would be my week this week with what I've been dealing with with some of my listings, I would've never believed you. I knew it was gonna change, but this is just so different. So if you are a buyer, start thinking about getting into the market before rates go any higher. If you're a seller, you really need to adjust your expectation from completely ignoring what your neighbor got in February and really trying to be more aggressive in your pricing so that if there is that one buyer, you're the property that they choose. I'm watching this really closely, but we are officially like way, way out of the market we were in months ago. Our COVID market is over and we are like on route to stabilizing and the buyers certainly are the ones that are, they're in control right now. I will be back next Tuesday, have a great week, everyone.