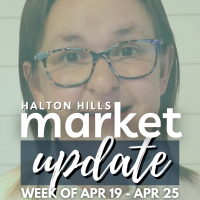 Welcome to this week's Halton Hills housing update. I said it last week, but we are officially leaving the crazy market that we were in. The numbers are pretty staggering. I'm still kind of in shock that this all happened so quickly, but let's take a look at what's happening. In Georgetown this week, we had 14 sales. Again, we've been talking about how this is a sign that the market's stabilizing, because we actually have things, like tons of things that you can buy, and so for our market to only be transacting 12 to 16 properties a week, it definitely is pointing us to a buyer's market because it means there's options and people aren't buying them. Another indicator is of the 14 properties that sold this week, 7 of them got over asking, so we're looking at half of the properties that transacted this week, sold over asking. The bidding war strategy just is not working anymore, and the under listing strategy is not really working anymore either. Things like this are telling us that we are leaving that market. Another piece of bad news is that there was 22 new listings in Georgetown last week. Buyers have options and our sales are just not keeping up anymore.

Now looking at Acton. Acton had four sales this week and seven new listings. Inventory's also sitting pretty high in Acton, and a huge variety of price points there. Across the board, we are just seeing a lot of new listings and not a huge amount of sales when there's actually stuff available to buy. Glen Williams this week had one sale and three new listings. I think that is the first week in probably two years that we have seen three new listings in the Glen in one week. The Limehouse market saw no sales and no new listings. The rural market had two sales and four new listings. Now looking at active inventory. In all of Halton Hills, last week we had 106, we are up to 114 active listings. We are getting to a very high number here. The highest number since I've been doing these market updates, so like two years of them, was in June of 2020. We had 137 listings and we never went back from there. I think we are a few weeks away from probably hitting a high that I have never seen since doing these market updates. Georgetown this week had 74 active listings, that's up from 72, so not a massive jump, but we did see quite a few properties just come off the market completely this week. Looking at our price points, under 800,000 is down from seven to six active listings. 800 to 1,000,000 remain the same at 14 active listings. This price point, which just keeps getting worse every week, 1 million to 1.5 million is up from 34 to 36 active listings. I wanna go back because in February, January, there was nothing available under 1.6 million, and now between 1 and 1.5, we have 36 properties. That price point is definitely the price point that has felt the most saturation, and is really feeling the impact of all these new listings coming on the market. 1.5 million plus is up slightly this week from 17 to 18, so not a huge jump there.

Now looking at Acton. Last week we were at 14, this week we're up to 17 active listings, very high number for Acton. Glen Williams is up to six. That's a very high number for the Glen, up from four. It does start at 1.8 million, so you need to have a much bigger budget to be there. Limehouse, the one property that was listed there terminated, so we have no active listings in Limehouse this week. And the rural market is up slightly to 17 active listings. I'm actually really surprised that the rural market hasn't felt a spike as well. Usually when town is saturated, our rural numbers go much higher, and we have seen in the high twenties in the rural market. This is sort of staying pretty low at the 17. Now when I look at the properties that have suspended, terminated, re-listed all that this week, there was 20 properties. One of them just re-listed at the same price, I guess, just to be fresh. Five of them went up in price after offer night. Again, offer nights are generally not working right now. One of them went down in price and attempting a new offer night. That number, as we were transitioning, was a lot higher, and now we're kind of stabilizing on people realizing it's not working. Only one property went lower than they were and is trying another offer night. Seven properties completely came off the market. They did not relist yet. They are completely off the market. I guess they're not getting the numbers they want or whatever, but seven of them just gone. And so that's bad, because our inventory was up this week, plus seven of them just completely left the market and six properties just lowered their price completely, so big, big shift. Sellers are just not getting the results that they were getting. Six weeks ago we were in a completely different market than we're in now. And, I mean, eight weeks ago it was chaos. I just never thought it would be this quick.

I'm gonna have April numbers next week, and I am really curious where they fall compared to last year. But, I mean, this is what people are sometimes losing sight of, prices are softening. There's no denying that. They're coming down, but they're correcting, we had a completely ridiculous spike. If you look at where house prices are this year versus last year, people are still way up, but the fact that their neighbor got 2 million and now they're getting 1.8, it feels like the market's crashing and all this stuff, but it's just correcting itself because that spike made no sense between January and the middle of March, so a correction is not the worst thing, it doesn't mean the market's crashing, but things are just stabilizing and buyers have options, so things are gonna change. I will be back next Tuesday with April numbers, have a great week, everyone.