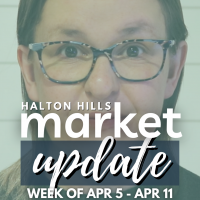 Welcome to this week's Halton Hills housing update. So I am in almost shock and disbelief at where the numbers are this week. We have seen a dramatic change in the last four weeks, and I think it is safe to say, we are officially leaving our sellers market, and transitioning, I think it's a buyer's market in some pockets right now. So this is a huge change, let's look at the numbers. In Georgetown this week, we had 16 sales. This is another interesting thing is, our inventory's sitting high, so when we were seeing inventory come up before, our sales weeks were reporting really high, because we had things to choose from. Right now we're seeing pretty normal weeks, last week was 13, this week was 16, despite how many listings we have on the market. So this is another indicator that things are changing. There's options out there, and they are not being purchased.

The real story with all of this is the inventory levels, last week we had 34 new listings in Georgetown. So many new listings for a week in Georgetown, let alone adding it on to what's happening right now, this is a major game changer guys. We are literally like in a four week span, our market is completely flipping upside down here. In Acton, we only had two properties sell. Again, a very low number, considering that there's stuff available. Both of them got over asking, so the stuff that is selling is that under list stuff, but there's a lot of stuff that aren't getting the results they're looking for, and this is just creating really high inventory levels. And there was eight new listings in Acton, which is a really big week. Overall, just, if you can't tell, I'm kind of in shock when I looked at these. I've been feeling it, living it, with my listings and with the market, but when I looked at the numbers this week, they're really staggering. Glen Williams and Limehouse both had no sales and no new listings. The rural market saw two sales and two new listing. So the rural market is the only one we're not really feeling a massive change in. As inventory in town starts to rise, we will start to feel the rural market start to pick up, in terms of listings as well, because rural always slows down when town slows down.

So here's the real conversation piece this week, is our active inventory. On March the first, we had 50 active listings in all of Halton Hills. This week, we are at 110. We have more than doubled our active listings, in a six week span. Those numbers are like pre COVID numbers, we have not seen the levels we're seeing this week, since then. I knew this was coming, I could feel it, but I did not think it was going to happen this quickly. So looking at Georgetown this week, we are up to 70 active listings, that's the highest number I can remember. I mean, not ever, but that 70 is a very high benchmark for Georgetown. Our active price points, under 800 is up slightly to five active listings, it's all condo town homes. 800 to a million is up to 15 active listings, huge pocket, there was many weeks where we had one to two active listings in the eight to million price point, so 15, a lot. Here is where it is really feeling a saturation. One to $1.5 million is up this week to 31 active listings. 31, if you have a budget up to 1.5 million, I mean, if you add all the price points together, you have almost 50 products to choose from, in Georgetown alone. This is no joke, guys. If you are a buyer right now, this is what you've been waiting for, and this is your moment. 31 properties between a million and 1.5. Crazy, crazy number. 1.5 plus is sitting at 19 active listing, and that is up from 11.

So, we have seen a huge jump and that higher ticket stuff, this is what's gonna cause prices to come down. Supply and demand, right? There's so much supply right now. There is evidently not as much demand as there was, and this is really going to shift the market. Acton this week is up to 20 active listings. I'm losing my mind with these numbers, because I have been living for two years in this lull of the market and Acton, literally I think in January at one point, had two active listings on the market. 20, and when we only two sales in a week in Acton, it means things are not being bought up. It's crazy. Glen Williams remains the same this week at three. Limehouse at one, and the rural market stayed the same at 16. So where we're really feeling things right now is Georgetown and Acton for sure. So another thing that I've been looking at, because this is kind of giving me an idea of the trends in the market. Is our expireds, but our terminateds, our relists, price changes, all that stuff.

Last week, there was 22 properties that did something regarding their pricing, or coming off the market after offer night. So 22 properties, nine of them went up in price, here's a key indicator, offer night is not working for everyone, people still want the big numbers for their house. After offer night, nine properties went up. Five of them decided that they were gonna try going even lower, and holding a new offer night. Two came off the market, and six properties last week lowered their price. That is something we would not have seen at any point in January and February. So six properties just straight up, brought their prices down. The market is changing and sellers are, I think they're all kind of in shock, that it's not where it was. I'm telling you, this is gonna be a dramatic four weeks. Everyone has to get retrained, strategies have to be adjusted, it's just a completely different market than we were in at the start of February. Like it's not even in remotely the same. You cannot expect to get the $2 million that your neighbor got. The market is not there right now, and I don't think it's going back there for a while. So, huge changes this week, insanely dramatic, we've been waiting for this, but this is just way quicker, and at a scale I didn't think was going to happen. So here we are. So we're watching this very closely, if you have any questions about your home, about strategies, about if you're thinking about buying, all that stuff, send me a message, 'cause there's a lot to unpack. So I will be back next Tuesday, have a great week everyone.