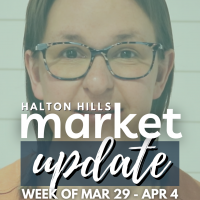 Welcome to this week's Halton Hills Housing Update. So, lots to cover this week, including March numbers, so let's jump right in. In March of 2021, we sold 159 units, and this month, we are down to 119 units in March of 2022. So that's down 26%, huge drop in comparison. I mean, we still saw inventory struggles, especially the first half of March. So, no huge surprise. Looking at our average price though. In March of 2021, our average price was 1,142,000. This is unofficial, because the actual numbers haven't been released, but based on my calculations. In March of 2022, our average price is up over 27% to 1,452,000. So we are really climbing towards that 1.5, but with things changing, I think we might be hitting around a top. I don't know if we're gonna get to the 1.5. So this is gonna be interesting to watch, but huge increase in terms of average price. Now, looking at sales. In Georgetown, we had 13 properties sell, 11 of them sold over asking.

So we are starting to see weeks where we don't have every property under listing and getting over asking. So we're slowly getting there. But the big story is we had 28 new listings, inventory, especially in Georgetown, skyrocketed this week. So lots of changes happening, let's just put it that way. In Acton this week, seven sales, which is a lot for Acton and six of them sold over asking, and we did have seven new listings there, so lots happening in Acton. The stuff that's coming up is definitely selling, but it's nice to see that we are also seeing tons of inventory there. Glenn Williams saw one sale and no new listings, nothing happened in Limehouse this week. The rural market saw no sales, but it did see three new listings.

So now let's look at active inventory. We are up to 87 active listings in all of Halton Hills. That's up from 74 last week. We are really pushing that triple digits, which we only saw for a two week period in 2021. So to be almost hitting triple digits is really showing, especially at the start of April, it's really showing that things are definitely moving back towards a more balanced market. So Georgetown this week, it is up from 43 to 53 active listings. So a really big jump. And we are seeing this now week to week. When we look at our price point, so under 800,000 is up from three to four active listings, 800 to a million is also up from 11 to 13 active listings, and that's quite a bit in that pocket, but the real conversation. So you'll remember last week I changed our price points. So we are now looking at one to 1.5 million. Last week we were at 18 active listings. This week, we are up to 25 active listings in that pocket. That is so much inventory in that pocket, and there are products, especially in Georgetown South, it's a little saturated in that price point, and there's options to choose from, which is definitely a change. There was a point this year where you could not get a house between one and $1.6 million. So to have 25 active listings in that price point, it's a big indicator of what is to come. 1.5 million plus remained the same this week at 11 active listings. So you can see that one pocket is really, really starting to show signs that we are gonna be going back to some normalcy here because properties are actually coming on the market.

In Acton this week, we remain the same at 14 active listings, which is kind of high for Acton. But again, this is happening across the board here. Glenn Williams is down to three active listings, Limehouse the same at one, and the rural market took a good jump this week up to 16 active listings. So the story, I mean, we know that prices have been continuing to climb, seeing over that 1.4 now for three months straight. So we are really setting a pretty high price benchmark. What I'm really curious about in April is if we start to see that price kind of taper off a bit, this is definitely our highest, and with the amount of supply that we are getting, I am really interested to see what happens in April. If we still see those high, high prices, or if we start to see things sort of calm down a little bit. So I'm gonna be watching that closely, but a really interesting week, and we're in a really pivotal time right now of change in our marketplace. So I'll be back next Tuesday, have a great week, everyone.