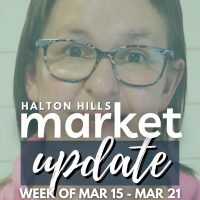 Welcome to this week's Halton Hills Housing Update. So, we are still seeing the market moving pretty good. We are seeing a lot of new listings, but again with the backlog of buyers that we have, we are still seeing a ton of sales too. So let's look at the numbers. In Georgetown this week, we had 15 properties sell, all of them sold over asking. So there still is this demand. Again, things are sort of in this in between. We did see stuff terminate and come off, but it's kind of an in between, but it's still very busy. I don't want to make it sound like it's not. It's just so many things are indicating that we're in a shifting market.

So, in terms of new listings in Georgetown this week, we did have 22 new listings, which is again keeping us going in that direction of the market, going closer to a balanced market. We're still not there. So you can see we're still far from that. Like 15 properties selling, all of them over asking, like we still have a ton of demand here. It's just week after week of getting more inventory, things are really starting to change. So Acton this week, big week in Acton, nine sales in Acton. We've seen a lot coming up there. So that is why we're seeing such huge sales numbers for a small town like Acton. So nine properties sold. Interestingly, only six of them got over asking. So, three of them got below or at asking. So that's a bit of a change. In terms of new listings, there were five new listings there this week. So, not as many as we've been seeing in the previous weeks, but it's still new stuff coming up, so that's good. Literally nothing happened in Glen Williams, Limehouse or the rural market. So, no sales and no new listings in those spots.

Now looking at active inventory, we are up slightly. Last week, we were at 57. This week, all of Hilton Hills is up to 60. The big jump that we saw this week was in Georgetown. So last week Georgetown had 33. We are up to 40 active listings, still very low, but we are up. Looking at our price points, under 700,000 is up to two active listings. There's one listing between seven and 800,000. 800 to a million remain the same this week at eight active listings. And the price point that is just getting hammered with new listings is our million plus price point. This is continuing to climb. And I actually think this could be the highest number we've seen above a million. We are at 28 active listings above a million. I've been doing these market updates for two years and I don't think we've gotten to that 30 threshold. So we are in the realm of the highest amount of listings over a million dollars that we've seen in two years. So last week was 25, which was a high number and we're still continuing to climb. There are options in that price point right now. And I mean, I know it's a big range from a million plus but the bulk of those are under like 1.6. And so, there's just options right now. And buyers have choices, which is something we have not seen in a very long time. Acton this week is down to seven active listings from 11, and there's only one of them under a million dollars. So, a little scarce there in Acton again. Glen Williams remains the same at two active listings. Limehouse has none. The rural market also remains the same at 11 active listings and they start at 1.9 million. So as always, you need some big money to be buying in the rural market.

So overall, we have not had any like major ups and downs. What this is though is the market climbing upwards. And it's shifting and it's going towards a buyer market. The backlog of buyers is pretty extensive that the market is still gonna keep moving, but there's gonna be pockets of stuff that we start to see sitting and not get a little saturated. And so, yes, demand is still here. It is not going away. But when supply starts to come on the market, so when new listings start to hit, things are naturally going to change. So, when we look at the last, especially the last two market updates, we've definitely seen that upward trend. And so it's happening pretty quickly. We can all feel it out there. So, it's not going to happen like that, but week to week as this builds, we are building towards a balanced market. So I will be back next Tuesday. Have a great week, everyone.