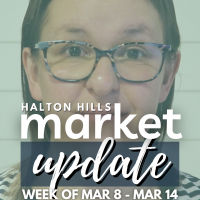 Welcome to this week's Halton Hills housing update. So really interesting update today, I think. Last week, we felt things changing, and I've got some interesting things to talk about today, in terms of relisting, adjusting prices, and everything that's been happening if a property is not getting what they were hoping. So let's look at the numbers. In Georgetown this week, we had 22 sales, which is a really high number, no surprise. There's been lots coming on. 20 of them got over asking. So still tons of bidding wars. And I don't want you to think that like, we're out of the woods yet. There is still a lot of buyers out there, lots of stuff is happening, lots of big prices. It's just not at the scale that it was before. But still 20 properties got over asking, and some of them, quite a bit. So it's changing but it's not dramatically changing quickly. In terms of new listings, we had 25 new listings. So again, another good week of having a good amount of new listings. So Acton this week had eight properties sell. Big week again for Acton, but there's been lots coming on there. Seven of them got over asking, and there were seven new listings. So we are seeing a ton of new listings in Acton. Normally, even when it's busy, we'll get like, two or three. But last week, it was eight. This week it was seven. So lots coming up there. So no surprise to see sales really high. No sales in Glen Williams, and there's one new listing. Limehouse had two sales, both of them got over asking, and there was no new listings. Rural this week saw four sales. That's a lot for Rural, but I'm not surprised. And two new listings there.

So looking at new listings. We are actually down this week to 57 active listings from 58. This has to do with some of the terminated products that I'm gonna talk about shortly. So 57 active listings in all of Halton Hills. Still very low, but still much higher than what we were seeing six to eight weeks ago. So Georgetown this week is up slightly to 33 active listings. Again, this is a very low number, but it is way better than the 11 that we were seeing. So I'm happy with where things are going. It seems like we're in this state of like, things are coming up, people are buying that inventory, and it's kind of balancing here. At some point, based on what's happening, I do think we're gonna see more of a climb. But for now, we're sort of staying pretty even. Looking at our price points, under 700,000, no active listings. Seven to 800,000, no active listings. 800 to a million took a dip this week to eight active listings, from 12. That was up big time last week. Very busy price point. Like, you list a house at 899, you're getting 1.1 to 1.2 million right now. And so that's where a lot of people are in that pocket, but they sell really quickly. Notable one million plus price point. There are 25 active listings in this price point. That is a very high number for that price point. We're up from 19. There was a point, I wanna say it was in like, December, or the start of January, where we had nothing available under 1.6 million dollars. So there was this pocket of stuff, like, we just couldn't satisfy. There are 16 properties available between one million and 1.5 million right now. So that, especially in Georgetown South, that pocket is feeling some saturation. That is going to inevitably impact prices, when we have that much selection of the same kind of product. So big changes in our higher ticket stuff. And then even over 1.5, a lot of those people are seeing what their neighbors are getting, and they're putting their properties on to try and cash out right now. And so, we just have a lot of big ticket properties available right now.

Acton this week is down slightly to 11 active listings, but that's still high in comparison to the two or three that we were seeing. So inventory's definitely on the climb there. Lots of buyers, lots of sales there. It is an improvement, and it is dramatically different from six to eight weeks ago. Glen Williams this week is up to two active listings. Limehouse has no listings, and the Ruel market is down slightly to 11 active listings, and that's because of our high sales week. So what I wanna quickly talk about, and this is such an indicator of change. So every week, I look at the sales, and then before I look at new listings, I look at properties that have terminated, expired, and possibly relisted. So some weeks there's none. A few weeks, especially around the end of the month, we'll have some coming off. What we saw this week, when I popped open that terminated or suspended list, I had 15 properties pop up. I don't know that I've ever seen a week with that many in my history of doing this. So let me break it down for you. Of those 15, four of them relisted at a lower price after offer night, because they didn't get what they wanted, and they made a new offer night. So sometimes it works. There was a house in Acton, it was listed at 1.1. Obviously didn't get it. Went down to I think 949, and then on offer night, sold at 1.1. So it sometimes works. But this is definitely something we would not have seen in January or February. So four properties did that last week.

Two properties reduced their price overall. Five of them relisted higher. And this is where I think things are about to shift. We are going to have to reevaluate our listing strategies on properties. Five properties after offer night did not get the price that they were expecting, or hoping for, and so their strategy didn't work, and so they had to relist their property at a higher price. As inventory begins to pick up, this is going to have to become a norm. And the buyers are gonna have to be retrained that not every property is going to get that two, 300 over asking. And sellers are gonna have to be retrained that the demand is not as high as it was. So maybe listing their house at the price that they actually want, imagine that concept, is going to have to be a strategy that we shift back to. Because when there's 15 properties available between one and 1.5 million, people have choices, and all of a sudden, it's offer night, and you don't have 10 buyers, because they're split between properties. This is super, super interesting. And this, if there was ever an indicator that something is changing, this. There was three properties that terminated for whatever reason. And one property that relisted at the same price.

So super crazy week when I saw that. That was something notable I really wanted to talk about, because we just haven't been seeing that. And I've been saying that we're gonna have to readjust our strategies, and this week supports that. So I am really interested to see what happens in the coming weeks. It's just different out there. So I will be back next Tuesday. Have a great week, everyone.