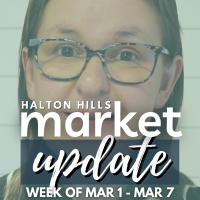 Welcome to this week's Halton Hills housing update. So things are still slowly changing but I definitely think it's safe to say we are in a different kind of trend and trending in a different way than we have been. It's slight but I think it's happening, so let's take a look at the numbers. In Georgetown this week, we had 19 sales which is a great number for sales in Georgetown. It means that inventory is actually here and people have something to buy. 17 of them got over asking, so there was two properties that didn't get over asking this week, which is kind of refreshing. So in terms of new listing is in Georgetown this week, we had 24 new listings, which is good news that we had more listings than properties sold, so our inventory's gonna be up. Something to note last week in Georgetown, we had, and this is where, when I talk about little things happening that wouldn't have happened, that show we're moving in a different direction, this is an example. We had five properties last week that terminated and re-listed after offer night. Three of them went up in price which means their strategy of under listing did not result in them getting the price they wanted on offer night and two of them actually dropped their price on offer night which was a surprise. And then there was another one that didn't get what it wanted on offer night and came completely off the market.

So eight weeks ago, this never would've been a thing. And I can tell you, I've had quite a few listings in the last few weeks. The number of showings is definitely down. The number of offers we're getting is definitely down. Eight weeks ago, if you put your property on the market, lots of unqualified people were coming through it and that's why we were getting like a hundred plus showings on listings because there was literally nothing else to look at. So they're like, let's go at least take a look and now what I'm finding is our showing count is definitely down, but the quality of people coming through the listings is very high. So this is a nice change for the market. And so, as things start to come on the market and there's options, we're gonna feel this little bit of a shift here. So that's my good news for Georgetown this week. In Acton this week we had eight properties sell big sales week for Acton but we've seen a lot of inventory coming up there and we did have eight new listings. So things are moving but they're coming up in Acton, which is great. Glen Williams had no sales and no new listings. There's nothing on the market in the Glen right now, we really need some properties there. It's been scarce to say the least. Limehouse had no sales but they did have two new listings, so at least some stuff coming up in Limehouse. Rural markets saw three sales so a really strong week for the rural market and there was five new listings there. So that is a lot for a week in the rural market.

All of this stuff just supports that our inventory is on the rise and things are slowly, slowly changing that we might be going towards a balanced market, finally. Looking at active inventory. So last week we were at 50 listings in all of Halton Hills. We are up this week to 58 listings, still a very very low number, but going in the right direction again. Georgetown this week is up from 28 to 32 active listings. Not a ton of listings in Georgetown but we do just need to keep going in that upward sort of direction. Looking at our price points, under 700,000, everything sold, there's nothing available in that price point anymore. Seven to 800,000 is down from three to one active listing, 800 to a million saw an increase from eight to 12 active listings. This pocket is moving but we are getting listings in this pocket so that is great news. The good story is the million plus price point for buyers here. We had a very scare start to the year in this price point, we saw inventory dip so low but we are seeing a lot of stuff coming on. So last week we had 15, we are up to 19 active listings. It was not long ago that we were at, like in January we had eight at one point. So it'd be up to 19 is showing that we're actually getting stuff on the market.

Now looking at Acton, Acton remain the same this week at 12 active listings. There are no listings in Glen Williams like we talked about. The Limehouse is up this week to two active listings and the rural market is also slowly climbing, it's up to 12 active listings, but that is a far cry away from that 20 plus point that we wanna be in when the rural market feels like it actually has options. And as always with rural, like you're at least one and a half million before you're getting into it this week. So just good news that some stuff is coming on. Overall, I'm really pleased with this market update. It has been a long year of really negative news. I think that seeing with the listings that I've had, how showings have sort of dropped off and even our number of offers, we're not seeing those double digit offers on very many properties anymore, unless you're under listing it by like $500,000.

I feel like the number of offers is coming down, the number of showings I am finding is definitely down. And we are just coming to a point where all those super eager people at the start of the year, scooped up those properties. They made that benchmark price point really high but I do think we're coming into this period where as listings increase, something's gonna have to give, seeing properties this week, not get what they wanted on offer night. Seeing properties re-list higher or lower, these are indicators that we are in a changing market. And at some point we are gonna have to readjust our strategies around list pricing and around just how this market is working right now. Buyers are gonna have to be retrained that they might not have to spend $400,000 over asking. And so I think we're gonna have an interesting next you know, four to six weeks when inventory naturally starts to come up, but I'm feeling optimistic that we might be moving towards a balanced market. So that is it for this week, I'll be back next Tuesday, have a great week everyone.