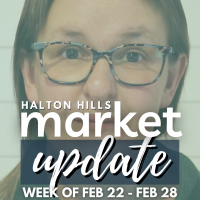 Welcome to this week's Halton Hills housing update. So I have February's unofficial numbers as well as what happened last week so let's dive in. In February of 2021 we sold 79 units and our average price was 1.117. This month we, in February of 2022, we sold 88 units. So that's up 11%. And that supports what I've been saying that our inventory is higher than it would normally be. So because there's things to buy our units that sold is up. No surprise there. In terms of average price of course the pricing is gonna be up. So we are up 27% versus last year and our average price is 1.423 million in all of Halton Hills. So big, big jump versus last year, but no real surprise with the numbers we've been seeing.

So overall February numbers, no huge surprise, but in terms of our current market, it was so like, oh, it felt you know, three weeks of it's going up, it's going up. And then we just didn't see the new listings to support it. So that's not ideal. So I do think that the trend and sort of what we're seeing is that people are listing their spring market homes a little bit earlier, the word's sort of getting out but the buyers are still here and we're still seeing lots of showings, lots of multiple offers. And it's just not going away I don't think anytime soon but I do feel like it's not the same out there. It feels a bit different. And it's definitely nowhere where we were in January when literally if you were the only house on like of course you're gonna have 50 to 100 showings. That's not really the case right now. So things are changing, not very fast, but they are slowly feeling like they're changing. So that is promising. So I will be back next Tuesday, have a great week everyone.