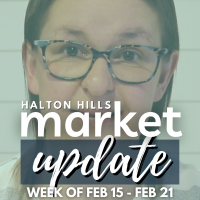 Welcome to this week's Halton Hills Housing Update. So, I hope you had a great Family Day yesterday and the numbers are gonna be a bit skewed this week because offices were closed yesterday. So, some of the sales reporting is a little bit delayed but the numbers still are very favorable, in terms of indicating that the market is changing a bit. So, Georgetown this week, had 15 sales. 15 of them got over asking price. Couple of notables, this is almost comical to me. A house in Georgetown South got $656,000 over asking. This is just, honestly it's stupid. At some point, as the inventory starts increasing, which I'm gonna talk about, we are gonna have to see people raising the list prices of their house to be more realistically in line with where comparables have sold. But for right now, we're still getting 656,000 over asking.

Another notable, Stewart Maclaren, which is our opening price point town homes. It's where people used to be able to start in Georgetown. A three bedroom in there just sold for 815,000. So, Stewart Maclaren has officially broke that $800,000 mark, never thought I'd see the day but here we are. 815 in Stewart Maclaren. So, pretty notable sales this week. So, Georgetown this week had 29 new listings. That is really the thing we need to be talking about this week. That is a huge amount of new listings hitting the market. I've really felt a shift in the last two weeks with the number of daily listings we are seeing coming up, not only in Georgetown but in all markets. Guelph. Milton. Brampton. Caledon. Kitchener. Everywhere is seeing a dramatic increase, in terms of daily new listings. And that's accumulating to Georgetown having 30 new listings this week. And so, I think the sellers are hearing what their neighbors are getting. They wanna capitalize on this market.

The interest rate conversation is around and I think people are, as a seller starting to think like, oh, what if this does change the market? So, something is happening and sellers are definitely getting their properties on the market. And then what happens here is, as inventory comes up, it means the people that have been waiting to buy, now can find something to buy. So, their houses are also gonna be hitting the market. We're in this cycle and we have wanted it to come. And I definitely think, this is your warning sellers, I think that we are on the cusp of getting towards a more stabilized and balanced market. I feel optimistic about this this week because the numbers don't lie. We have seen a lot of listings coming. So, anyways. Acton, this week only had one sale but they did have seven new listings. So again, that's a good week for Acton. Majority of those are all gonna sell. So, we'll have a high sales week, next week but that's a lot. Glen Williams had one sale and no new listings. Nothing's happening in Limehouse, no sales, no new listings. The rural markets saw one sale and one new listing.

So, active inventory, we are up to 57 active listings. Let's go back here folks. 57, the last time we saw that range was in the middle of October. So, 57 is a great number. It's still scarce in the grand scheme of things but we were sitting at 26 listings at one point. So, huge increase in inventory this week and I think it's going to keep up because I can just tell from my business too, sellers are really thinking about cashing out right now. Georgetown this week, 37 active listings, big number for Georgetown. We wanna get up into that 60 range in town but 37, long way away from the 9 and 11 that we were seeing a few months ago. Looking at our price points, under 700,000 is up to four active listings. They're all condos or condo townhomes. 7 to 800,000 has two active listings, the same as last week. 800 to a million is up to 10 active listings. Again, a lot of inventory in that price range that came up on Wednesday, Thursday of last week. So, the real conversation here is a million plus. I think these are the sellers that are really seeing what their neighbors are getting because $1.9 million on a subdivision house in Georgetown South, these people are like, wow, the McDonalds next door got that. I've wanted to move to the cottage, this is my opportunity. And we are seeing a huge increase of those listings coming up. So, last week we were at 14, we got as low as I think seven one week, eight, and we're up to 21 active listings.

So, a lot to choose from in that price point, it is one of our busier price points. So, it's good to see inventory coming up but a huge change, if you're following my numbers week to week, you know how big of a change this inventory is. So, really promising that the influx we usually see in April and May, is happening right now. Acton in this week, is up to 11 active listings. That's the first time in a while we've had double digits there. Glen Williams has one. Limehouse has none. And the rural market is down to eight because we had one listing terminate there this week. So, big, big moves happenin' people. Maybe next week, I'm gonna retract on all this and everything's gonna be way, way down again. But I really do think, with the amount of new listings we've been seeing on a daily basis, this is really the start of things shifting. And like I talked about at the start of this video, that is gonna have to equate to people readjusting their list price strategy. If you have five to eight properties listed at 1.5 million and you all wanna get 1.8 or 1.9, those buyers are gonna have to divide and conquer on offer nights and it's going to start splitting the market.

When there was only one to choose from, yeah, all the buyers had no options to choose from. So, they had to offer on that but things are changing. And I think this is the start of it. Maybe I'm wrong but I do feel with all the talks of interest rates and just with the numbers that people are getting, we are gonna see an influx of listings. So, that's it for this week. I think next week, I'm gonna have a very high reporting of sales numbers because we missed out on some of the sales to report from this weekend. But if we can keep up with those inventory numbers, we're gonna be getting ourselves in a pretty good spot here, to have a more balanced market. I can't wait. So, I will be back next Tuesday, hopefully with another report that inventory is continuing to increase. Buyers just need options out there. That's just the long and short of it. So, I will be back next Tuesday, have a great week, everyone.