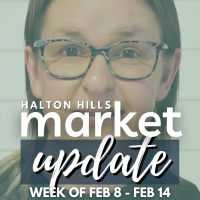 Welcome to this week's Halton Hills housing update. So we've got some good news in terms of inventory this week, so yay, but I anticipate it won't last too long but let's just take this week, 'cause it's actually really refreshing to see where the numbers are this week. So, in Georgetown this week we had 13 sales. 13 of them got over asking. Lots of them got between 200 and $400,000 over asking. I literally cannot wait for the day when I don't have to tell you that something gets two to $400,000 over asking. Just listing a house at what it's worth, it sounds like a dream, but right now it just not the best strategy for sellers, and we're seeing a lot of this chaos. So that's gonna continue to happen as we continue to have low inventory levels. But I do look forward to the day where I don't have to tell you that something got $400,000 over their asking price. Something else to note, last week in Georgetown South, three properties got $2 million and over, three. All of a sudden we've hit this new sort of benchmark where if you have a big house in Georgetown South you can get $2 million.

So here we are, three properties last week, 2 million bucks. If I could go back five years, let me tell you I'd do a lot more different things with my money. Okay, I digress. The good news this week, inventory. So we had 23 new listings last week. Going into the weekend, we were double what we were in Georgetown the weekend before. So the weekend before we went in with 14, and last week there was 20 listings going into the weekend. So, that is a huge jump. All that stuff is gonna sell in the next three days. 12 of them had offers last night and today, so all this stuff is gonna sell, and next week I'll have a really high sales number to tell you. It's the same thing that we felt last year. We'd have a week where we'd get a ton of inventory and then the next week we'd have a ton of sales, but inventory would be down, and then the same thing would repeat itself forever. So hopefully we can continue to see new listings coming up. We are a long way from satisfying the buyers still. It is great to see this inventory coming up, but there's still just so many buyers. And so we just need a lot of weeks where we see 20 to 30 listings. That's a good number for Georgetown. We just need a lot more weeks of that.

In Acton this week we had five sales. Five of them sold over asking. A house in a subdivision in Acton got $1.5 million, just over. It was a ravine lot. It was nice. But yeah, we're now at $1.5 million for a subdivision house in Acton, and we had only one new listing there, so that is not good news for Acton inventory levels. Glen Williams this week had one new listing and no sales. Limehouse had no new listings and one sale, and the rural market had no sales and one new listing. Now looking at active inventory. Halton Hills this week is up from 34 to 41 active listings, which is great. It was November the last time that we saw inventory overall in the 40 plus range. So, good news there. Georgetown this week is up to 25 active listings. Great jump from the 15 last week. No surprise given how many new listings we saw. Looking at our price points, under $700,000 has one active listing. Seven to $800,000 is up to two, 800 to $1 million we're back up again this week to eight active listings. We saw a week where we had nine, and then it went to three, and we're back up to eight. All of those will likely get over a million dollars. This is the crazy thing now. But yeah, eight active listings in that price point is a good amount. Million plus this week we have 14 active listings, up from 11, so that is great news. It is definitely not in the 20 to 30 range that we were seeing when things were a little calmer, but it's going in the right direction. So 14 active listings there. Acton this week is down to only five active listings from nine. Glen Williams is up to two. Limehouse has no available listings, and the rural market is up slightly to nine. Super low number for the rural market. Nine is just very, very scarce there.

Okay, so this week is interesting. Some markets are up, some are down. We are still feeling a lot of chaos. I do think a lot of people are getting in the mindset of listing their homes if they have the ability to do it. They're seeing their neighbors in Georgetown South getting 2 million bucks and they're like, "Hey, maybe that could be me." So, as this continues to happen we should see inventory picking up. But again, still a really long way before we start to feel any kind of shift. So I will be back next Tuesday to report if we can continue to have inventory climbing. That would be great. Have a great week, everyone.