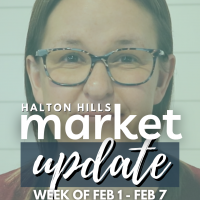 Welcome to this week's Halton Hills housing update. So the numbers that we are seeing are still staggering. So let's take a look. In Georgetown this week we had 16 sales, which is a really good number for Georgetown. That has everything to do with the fact that we actually are getting inventory for people to buy. I mean, if there was a unlimited inventory right now you know our sales would be 20, 30, 40 a week, but there's not a lot to buy. So it's still keeping the sales numbers overall low, but it's getting higher because inventory is picking up. So 16 sales, 15 of them got over asking. Last week I discussed the $899,000 price point. I said, I think there was six properties on for $899,000. I said, they're all gonna get over a million. I was right. They got between $1,003,000, so a million 3,000, and $1.23 million. So huge sales last week. So if you are looking at MLS at $899,000, like do not be fooled, you need to have a million dollar budget to buy those properties. I just want this to all be over. It's just, it's just crazy.

So in terms of new listings only 13 new listings last week, which is bad news. We saw nine of them yesterday. So just kind of, not a lot came on last week, but hopefully this week we see a pickup. Those 16 people hopefully have things to list and sell that bought so we just need this to keep turning along here but only 13 new listings in Georgetown this week. So inventory's gonna be down, not great. But what do you do? Acton this week had seven sales, huge week in Acton. Seven sales even when like inventory is good is a lot for Acton. Six of them got over asking and the good news is there was seven new listings. So there's stuff coming up in Acton. And I mean we saw what I would call basic subdivision houses in Acton last week at over $1.4 million. So even Acton is crazy. I never, I have a client that lives on Tanners in Acton, he said I'll sell when you can get me a million dollars. I was like I will never be able to get you a million dollars. You know, this was two, three years ago, and all of a sudden his property's worth like $1.5. And so it is just kind of crazy where things have gone in the last like 12 to 15 months. Glen Williams and Limehouse saw no sales and no new listings. The rural market saw one sale and one new listing.

Okay so now looking at active inventory we have some bad news is inventory's down again this week. So last week we were at 39 and it was so promising. We had all these weeks of increasing, no. We're right back down 34 active listings this week. Not great news for buyers. This is just showing like there's just so much demand. And when things come up they're being, they're being bought and we just can't keep up with the demand right now. So looking at Georgetown last week we had 19 listings, this week we're right back down to 15 active listings. So very low numbers there. Looking at our price points. Under $700,000, no active listings, seven to $800,000 we have a great condo town home for $749,000 on Palomino trail. That is one of my, probably my favorite condo town home street. It's this little pocket. I mean in this market I anticipate it'll get between $850,000 and $925,000, but it is on for $749,000. But if I had to buy a condo town home in town it would be on Palomino Trail. Anyways, $800,000 to a million is down to only three active listings.

So last week we're at seven and we were talking about how that is a super high number. Well pretty much all those are gone. We're down to only three active listings and the ones that are there I anticipate the same thing. You know, they're gonna get over that million dollar mark which is crazy. A million plus, last week we were at 12, this week we're down to only 11. Still just not enough. We are getting that variety of stuff coming in Georgetown South. We could really use like $1,200,000 to $1,600,000 in, in Georgetown, not the like subdivision Georgetown South houses. Like we really have not seen a lot come up in that pocket in Georgetown. So that's really lacking I think. And I know there's lots of buyers for those kind of properties. So overall Georgetown is just still in a spot. Acton this week is down slightly to nine active listings. Glen Williams still has that one listing sitting in a sort of conditional status. Limehouse has one active listing. It's a big ticket at I think $2.8 and then the rural market remained the same this week at eight active listings which is a very low number for the rural market. We are used to seeing even when our inventory was low, rural was sitting at like 20 plus listings. And so only eight active listings in the rural market is very very low.

So these numbers are not getting any better. Like everyone wants to talk about this market crashing, this market going backwards. But when we are looking at these numbers, at least in our marketplace in Halton Hills, the backlog of demand to be here is just so high. That even if you didn't see my reel this week about interest rates versus inventory, even if interest rates climb, if we don't see some inventory coming on, we are still gonna be in a situation 'cause there's a lot of people that a 1% interest rate rate change is not going to make or break their home buying process. So it's gonna be interesting to watch here. We're seeing a lot of really big numbers and week to week it's climbing. Like two weeks ago an end unit in Weaver's Mill got $1.175. And this week it's over $1.2 for the same model. Like it's just going up week to week. And I don't know when it's gonna slow down but it's not anytime soon. So I will be back next Tuesday. I hope y'all have a great week.