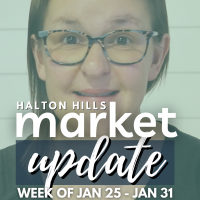 Welcome to this week's "Halton Hills Housing Update." So I have last week's numbers, but more notably, let's talk about our January-over-January numbers. We probably still have a sale or two that's gonna trickle in today that I'm not gonna capture in these numbers to have the official-official January numbers, but these are pretty close. So in January of 2021, we sold 50 units, and in January of 2022, we sold 49. So basically the same amount of units. We have had very, very low inventory this month and last January. So to see those numbers sitting lower is no surprise. The more notable conversation is the average price. So in January of 2021, when we thought we were like in utter chaos, and the sale prices were blowing our minds, well, this is now blowing my mind. So January 2021, we had, a million 51 was our average price. This past January, we've officially broken the 1.4 realm. And we are at 1.414 million. That is up over 34% since last January, when we thought the market was crazy, but this is more crazy. So this is no huge surprise.

We saw a lot of stuff sell over that 1.5 price point, especially like basic houses that never would have gotten over 1.5, you know, even in the fall. And now they're pulling that average price up, big time. So over 1.4 million is officially our average price in Halton Hills. Insanity. So now looking at what happened last week. In Georgetown, we had 13 sales, which is up from the previous weeks that we've been seeing. But again, our inventory was the highest it's been. So there was actually things for people to buy. So 13 sales, 10 of them sold over-asking. There was a couple there that like were kind of over-listed and sold under-asking, but yeah, 13 sales versus like the 8 we were seeing. So we're starting to pick up as inventory picks up. New listings, we had 16 new listings, and I think that's our highest number of new listings, like since November. So great to see some inventory coming on, but again, tons of buyers. All these things are gonna get scooped up. So what we're gonna start seeing is just higher sales numbers because there's actually stuff to buy. Acton, this week, had three sales, three of them sold over-asking. There were six new listings in Acton. So that's good news there. Again, inventory has been scarce there. So yay to six new listings. Glenn Williams had one sale and no new listings. Limehouse had no sales, but it finally has one new listing. We have not seen something in Limehouse in months. So one new listing in Limehouse. The rural market saw two sales and two new listings. Now looking at active inventory. So we are up.

Last week, we were at 34 active listings in Halton Hills, and we are up to 39. Still very low, but again, every week we're climbing. So it's like, come on, keep doing this for like months, and maybe we'll get somewhere. Georgetown is up to 19 active listings, from 17. Looking at our active price points. Basically, there is nothing available in Georgetown under 899, but to note, our 800 to a million price point has seven active listings, which is so high for that price point. I mean, it's not so high, but in comparison to the two last week, it just means things have come up. But there are six of them sitting at 899. So six of the seven are at 899, and then there's one in the 900s. 899 has been this interesting price point where when you list it at 899, you're getting between a million 50 and 1.25. So 899 is like this irrelevant price point. Like it's still all getting over $1 million, but that is just a lot of stuff available at 899 for the first time in a long time. Also something to note, I forgot to talk about this in the sales. A middle town home in Dominion Gardens, so in the middle of the row, two-bedroom, unfinished basement, it sold for $1 million this week. $1 million for a two-bedroom, middle town home, no finished basement. That's what you get for $1 million in Georgetown right now. So all these 899s, you're having to pay 1.1-plus for these kinds of things. It's just pretty insane how $1 million doesn't really get you much anymore. So anyways, back to our price points. The million-plus price point is down to only 12 active listings. Five of those are under 1.5 in Georgetown South. So this is like the next realm of that 899. In Georgetown South, if you're listing something between 1.2 and 1.4, you're now fetching that 1.6 to 1.8.

Everything is so skewed and shifted right now, but it is good to see some stuff coming up in Georgetown South, because we had like six weeks where there was literally nothing to look at in Georgetown South. So lots of stuff there, it's all gonna sell. We definitely need new inventory to keep up with all these products that are about to sell this week. I digress on Georgetown. Acton in this week is up to 10 active listings, from seven. So that is great news. I think four of them are under that million. And then there's quite a few higher ticket things available, but they seem like a steal in comparison to the Georgetown prices. So yeah, stuff to check out in Acton. Glen Williams is still sitting at one active listing, down from two. Limehouse is up to one active listing, from none. And the rural market remains the same this week at eight active listings. You basically need 2 million bucks to start in the rural market, but there is some stuff available there. It's just very low.

So everything's a bit crazy right now. Really awful time to be a buyer, especially a first-time buyer. What you can get now is just not a lot for $1 million. My mind is blown on that two-bed in Dominion Gardens. Like that would have been 600,000 in the fall. It wouldn't have even maybe been 600,000 in the fall of 2020. So it's crazy where prices have gone. Last January, we thought it was insane, and we are up 34% since then. So like, what do I know? What do we know? Let's just, the buyers are just spending so much money on houses right now. So anyways, I don't think we're in for much of a better story for February. The numbers we're seeing, I don't see them slowing down anytime soon. Like the interest rate didn't go up. So that's definitely not changing anything. And even then, we're still months away from the interest rate impacting anything, in my opinion. So I will be back next Tuesday with your numbers for the start of February. But I anticipate that we could hit 1.5 million for the month of February, if enough things come on the market. So I will be watching that closely. So I'll see you next Tuesday. Have a great week, everyone.