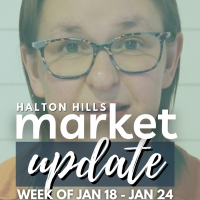 Welcome to this week's Halton Hills housing update. So the numbers are just getting like grosser. Is that even a word? I don't know, but like the numbers we're seeing are really crazy and it started that first week of January. And honestly, like it's not slowing down and some of the sales we reported this week are staggering. So let's look at what happened this week in Halton Hills.

So what we will start to see again, it happened last year when we saw the jump in January, we're gonna start seeing list prices raise a little bit, and we'll start to see less of that, like three, 400,000 over asking. But honestly, like this is just going to bring our prices up. Our average price this month in Georgetown, like I don't even know where it's gonna be, but it might be over like 1.5 at this rate. Sorry, that was a long spiel on the solds in Georgetown But I was looking at the numbers and I was like, wow, this is worth talking about. Looking at new listings, we had 10 new listings this week. So at least inventory is gonna be up, but like 10 is not anywhere near enough. Acton had one sale and four new listings, that's great. Glenn Williams had no sales and one new listing, one sold conditional. The one had offer multiple offers last night. So I think by the time I update this next week all the Glen Williams listings will be gone. Limehouse had no sales and no new listings. The rural market saw three sales, which is a big week for rural, two of them saw over asking. And this just goes to show you that when there's nothing in town, lots of activity starting to buy up the rural properties because there's just nothing to choose from.

So now looking at active inventory, we are up to 34 active listings in all of Halton Hills. And we are sitting at the same number we were at the first week of December. So we're climbing, it's only like three a week, but I mean, it's technically going in the right direction. So the highest number we saw in terms of active listings in 2021 was 103. So at this pace, it's gonna take us like six months almost to get to the highs that we saw in 2021. It's just not enough inventory hitting the market. So unless we can see some dramatic increases we are gonna be in for a very scarce market. The only thing we can take good from all this is that it is going up. It's just not happening quick enough, that's for sure. Georgetown is up this week to 17 active listings from 16. So not a big jump, but it's up. Looking at our price points, under 700,000 remained the same this week at two active listings, there's nothing available between seven and 800,000. 800 to a million is down to only two active listings and a million plus is up. This is our only budget that is up this week. So a million plus is up from 10 to 13 active listings. So still very low numbers there, but there's actually quite a bit of stuff available under 1.5 million in like the Georgetown South area. So those will all be gone because just the nature of what's happening, but there is actually a few properties to look at. So yea, but again, basic Georgetown's house stuff that was getting one, three last year, especially in like one seven, the prices are just going insane.

Acton this week is up from four to seven active listings, which is great 'cause we've been very scarce in Acton. Most of those are under a million that came up, they're gonna sell, but we are hitting levels that we saw in November there. We had no inventory for a long time in Acton. So that is good news that there's at least stuff to look at there. Glen Williams is up to those two active listings that I was talking about. I suspect they will be gone by this time next week, Limehouse, still no active listings there. And the rural market is down to only eight active listings. That is the lowest I think we've seen in the rural market. Basically it's 2 million plus, there's one sold conditional under that, but then you got to go right up to 2 million to get anything in the rural market.

So the numbers are not looking great. I had a client bet me this week that by April 1st, the market is gonna be retracting. And I just looking at this, knowing how many people are looking at these houses and how many offers these houses are getting, like, I think we are so far from it feeling remotely fixed. Even as interest rates climb, it will, every time there's a hike, it will take a few buyers out. But again, we have 120 days where people can hold their rates. So even when interest rates go up, we still have that delay. And so I think it won't be until the back half of the year, for sure, when interest rates have started to climb, you know, quarter after quarter, I just think we're a long way from feeling any kind of relief. So I will be back next Tuesday to report on the January sales and I think they're gonna be crazy. So I will see you then, have a great week, everyone.