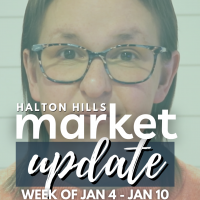 Welcome to this week's Halton Hills Housing Update. So we are less than two weeks into 2022 and the writing is on the wall, I think, that this year is going to somehow be worse than 2021. A lot of people think agents enjoy this kind of market, but I think I can speak for a lot of us when saying this is not fun. Our buyers are frustrated and it's a lot of work, and it's a lot to deal with. This market is just not giving up right now. Let's look at the numbers, but honestly, I think 2022 is going to be insane.

So in Georgetown this week, we have four sales, which is very low, but we also had like nothing to buy last week. Three of them got over asking and some really big numbers last week. Those are sort of going to set the benchmark for where we go. It happened last year. We kinda took this jump in January and then it set this new precedent of like, where the year went with numbers. I think that is starting to happen. It definitely happened last week. So I think January is going to be this huge leap and we're gonna just go from there this year. In terms of new listings, we did have nine new listings come up in Georgetown, so that's good news. I mean, we had some come off the markets, our inventory isn't up huge, but nine new listings is a good sign that at least we're getting some new stuff. Acton this week had four sales. Four of them got over asking. There was an influx in inventory in Acton last week, but pretty much it's all gone this week. There was only one new listing last week, so really, things are really scarce still. Just not enough coming on the market. Glen Williams this week had no new listings and no sales. Limehouse, no new listings, no sales. The rural market saw one sale and two new listings.

When we're looking at our properties that sold last week, on average, the properties are getting 15% over list price, so we have some big numbers happening. Like I said, we're just setting this benchmark for prices to just take off in 2022. I didn't think it could get higher, but like here we go, people. Okay, active inventory remain the same this week. In all of Halton Hills, we have 29 listings available. Georgetown this week is up to 13 new listings, which is still scarce, but it's up so let's just keep going that way. Under 700,000 is down this week to only two active listings. Seven to 800,000, this price point is not had a listing in a long time. It has one active listing. 800 to a million is also up slightly to two active listings. These numbers are still so low. Like when we look at Georgetown, there's only three freehold properties available under a million. I had a listing under a million last week and it had 167 showings, and I couldn't even get everyone in, so there would have been more. Under that million plus, there are so many buyers to satisfy and we just are not gonna have any kind of inventory coming up to be even close to meeting that demand. So these are the things that are happening that are just indicating that 2022 is not gonna slow down. Acton this week, we are down to only three active listings. There's one at 900,000 and then we jump right up to 1.5 million. Two of them are sitting there. So Acton is back down to being very scarce in terms of inventory. Glen Williams has one active listing. The Limehouse market still has no active listings. And the rural market is up slightly to 12 active listings.

There is just so many buyers and every property, we are hearing of so many properties that are getting like 20, 30, 40 offers right now. Those buyers, I mean, we do have some new buyers entering the market, but a lot of those people are leftover from 2021 that had no success in securing a property and now prices are going even higher. So we are just in a serious predicament here and I don't think we are anywhere near it changing. I think 2022 is going to be just as bad as 2021 and all signs are pointing that way. Yay. I will be back next Tuesday. Hopefully I have some better numbers. The good news is like for Georgetown, we have seen increases in inventory week over week. They're very small and the numbers are still very low, but if we can compound some weeks of inventory increasing, we need to do these things to satisfy these buyers. I will be back next Tuesday with hopefully some better numbers. Have a great week, everyone.