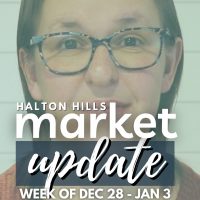 Welcome to the first Halton Hills Housing Update of 2022. And this is my 100th episode of this market update, which I think is a bit crazy. I started this almost two years ago, and obviously, a lot has happened since then. So I just want to thank you for tuning in every week. I love doing this and I love the conversations that are had with the people that watch this. So thank you again for supporting me. 100 episodes, feels crazy. So second, Happy New Year. I hope you all had a great holiday. We are now officially into 2022. The real estate market is already completely insane and we're four days in.

So today I'm going to review December numbers, and then, I'm going to review what happened last week. It was pretty quiet. So let's look at December numbers. So the last like six months have been the same story. Our units are down because there's been no inventory and prices are up and that is remaining the same and I anticipate that's gonna be the case for a while. So in December of 2020, we sold 66 units. And in December of 2021, we sold 41. So we're down 38% in terms of units. Again, in December, there was just nothing for people to see. It was such a scarce market in December, and so, I'm not surprised to see such a huge drop in units. Looking at prices. In December of 2020, our average price was 934,000. In December of 2021, we are up to $1.233 million. That is up 32% year-over-year. That is technically down from our over 1.3 in November, but I think the biggest factor in that is we saw very, very few listings come up over a million dollars in December in comparison to what we've seen in the previous months. There just was not a lot for that pocket to buy. We basically saw nothing between a million and 1.5. And that price point really pulls up our average price. So even though we're up significantly December over December, like 32% year-over-year, that's insane, we are down from November, but I literally think that is only because there was nothing for the higher price point buyers to buy to bring our price up. So that's where we're sitting and I will have year-over-year numbers next week because they're still finalizing everything, so it's crazy.

So now looking at what happened. Last week is our slowest week in real estate every year. That week between Christmas and New Year's is just dead. So not a lot happened. In Georgetown, there was two sales, both of them got over asking. So in terms of new listings last week, we only had three new listings, so very quiet week overall. Acton had no sales and there was four new listings, so yay for four new listings in Acton. That's a good week, so let's take that. Glen Williams had no sales and one new listing. Limehouse had no sales, no new listings. The rural market had no sales, but it did have one new listing. So now looking at active inventory. The great news is we are going into the new year up from last week. So last week, we're at 23. This week, we're sitting at 29 active listings in all of Halton Hills. Still like super, super low, but that is up, so hopefully, we can just keep going up every week. Probably not, but let's just hope. Georgetown this week is up to 11 active listings from nine. This number is still so low, like we were up over like 50, 60 at points in April and May, so to sit at only 11, it basically means there's nothing available.

So now looking at the price points that we break down in Georgetown. Under 700,000 has three active listings this week, which is up slightly from last week. Seven to 800,000 has no available listings. 800 to a million is down to only one active listing. And the million plus price point remains the same this week at seven active listings. It's just really, really low, it's bad. Acton this week. So the good news is we are up. We were down to only two listings last week. We are up to six active listings in Acton this week. Again, still a low number, but six is something. I mean, most of those are gonna sell, but it is good news to see that inventory picked up there. Glen Williams has one active listing. Limehouse has no active listings and the rural market is down slightly to 11 active listings. So we are entering this year in a very low inventory state. I have a listing right now and we have had 170 showings on it. When we talk about where the market's going this year, there's 170 people that would like to buy a house right now. And that's just in a certain budget. There's way more out there. So we are very far from any kind of shift in this market. I'm gonna touch more on this in my 2022 predictions, but there is just so many buyers out there and there's just no properties to sell them. So if you have been thinking about selling in 2022, I still think the next six months are in for an increase and I still think it's a great time to be thinking about selling.

So I'll be back next week. Hopefully I have some good numbers to report. I'm really hoping a lot of people were waiting for the new year before they listed their home, so I'm hoping we see a spike, but never holding my breath given what trends we've been seeing lately. So I will be back next Tuesday. Have a great week, everyone.